Hue and Hang Bai streets in the central area of the capital city, which has fashion, home appliance and food shops, and is 2 kilometers long, are quiet these days. A lot of shops have been closed. 'For Lease' signs and banners were seen hung at entrance doors of many houses. 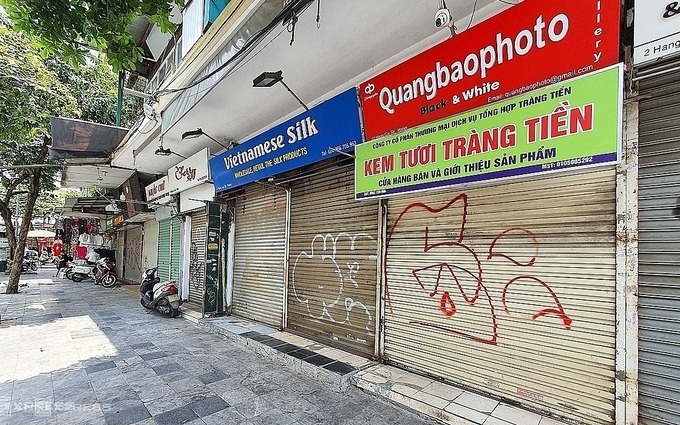 The owner of the clothing shop at No 12 Hang Bong street said her shop had moved to Hang Manh street. “The rent there is lower, and the business atmosphere is better,” she explained.

The rent of shops with area of 8-11 square meters on Hang Bong street is VND10-12 million a month, a decrease of VND2-3 million compared with pre-Covid-19 days. Landlords require rent every six months. Some landlords have decreased rents for 1.5-2 years.

According to JLL, the rents of street-front houses in Hanoi have been reduced by 20 percent.

A survey by CBRE in late April of 200 tenants also showed the gloomy situation of the retail premises market. Seventy nine percent of tenants feared that the business environment would be worse in the last six months of the year, while 43 percent said the revenue would fall by 10-30 percent in 2020.

Consultancy firms all said that retail premises owners have been hit hard by Covid-19.

According to estate experts, businesspeople have become hesitant leasing retail premises and opening new shops because business performance of street-front shops in Q1 was seriously affected.

Business improved in Q2, but the revenue remains unsatisfactory because the purchasing power depends on domestic buyers.

A report from Batdongsan.com.vn showed that the number of ads offering to lease street-front houses in Hanoi in Q2 increased by 6 percent compared with Q1, but rents have been decreasing. In Hai Ba Trung district, the rent has decreased by 4 percent.

However, analysts said the rents are still high despite the decreases. The retail premises market remains very attractive in the long term. Some foreign retailers are moving ahead with plans to expand their networks as they believe they can find the best premises at the moment.

The Hanoi authorities have decided to temporarily close its pedestrian streets in the Old Quarter as of midnight August 21 in an effort to minimize large gatherings on weekends to prevent the Covid-19 pandemic.