Chairs of biggest state-owned groups to be replaced

VietNamNet Bridge - A number of key leaders of state-owned enterprises will retire this year, according to Deputy Minister of Industry and Trade Do Thang Hai. The appointment of new chairs will be decided by Prime Minister Nguyen Tan Dung.

VietNamNet Bridge - A number of key leaders of state-owned enterprises will retire this year, according to Deputy Minister of Industry and Trade Do Thang Hai. The appointment of new chairs will be decided by Prime Minister Nguyen Tan Dung. 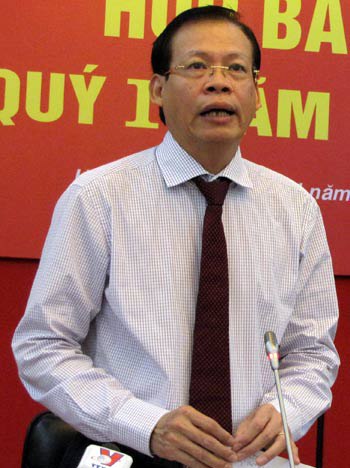 PetroVietnam Chair Phung Dinh Thuc is about to retire.

Hai said at a press conference on Monday that the Ministry of Industry and Trade will recommend some candidates for the approval of the relevant bodies and that the Prime Minister will make the final decision.

The Deputy Minister of Industry and Trade revealed that before the holiday of 30/4 - 1/5, the Ministry introduced candidates for the chairmanship of Vinatex and organized a vote of confidence. The vote of confidence for the chairmanship of Vinacomin was held on May 6. "Particularly, for PetroVietnam, the Prime Minister allowed to appoint  an official of PetroVietnam to the position," Hai said.

According to Hai, the Ministry of Industry and Trade will send its controllers to state-owned groups to monitor the operations of these corporations.

In late April, the Board of Directors of the Vietnam Steel Corporation (VNSteel) appointed Mr. Nghiem Xuan Da, a board member, as the General Director from now to 2016, replacing Mr. Le Phu Hung.

In March, PetroVietnam appointed Mr. Ninh Van Quynh, former chief accountant, as the head of the Finance-Accounting and Auditing Committee of Petrovietnam.