VietNamNet Bridge - Thousands of items of goods from Southeast Asian countries are no longer subject to import duties from January 1, 2015, as part of Vietnam’s commitment under the ASEAN Trade in Goods Agreement (ATIGA) from 2015 to 2018.

VietNamNet Bridge - Thousands of items of goods from Southeast Asian countries are no longer subject to import duties from January 1, 2015, as part of Vietnam’s commitment under the ASEAN Trade in Goods Agreement (ATIGA) from 2015 to 2018. 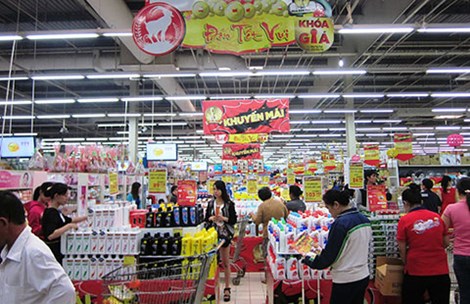 According to the special import tariffs issued by the Ministry of Finance in Circular 165/2014 (effective 1/1/2015), there are an additional 1,715 tariff lines that have been reduced from 5% to 0%, for agricultural products, confectionery, meat, poultry and other items.

Mr. Luu Huynh, from the Pham Nguyen Confectionery Company, said that production costs will fall under the tax incentives, but it is not a major concern as the prices of domestic confectionery are more competitive than imported products.

However, local businesses must develop their own strategies to thrive in a more competitive market.

Mr. Do Phan Thanh Bao, Director of the Dona Newtower Food and Beverage JSC, said the import duty rate of 0% will cause foreign consumer goods to flock to Vietnam, including soft drinks. Domestic drink producers will face fierce competition.

Bao said that some kinds of materials used in the soft drink industry are imported with tax rates of 10-15%, while finished drink products are imported at a tax rate of 0%.

It is difficult for local products to compete because they have to pay other costs such as transportation and taxes.

General Director of Vissan, Mr. Van Duc Muoi, said frozen meat is imported into Vietnam at a tax rate of 12% to 30%, depending on type. When the ATIGA is fully implemented, the import tax rate will be 0%, and the price will reduce the tax. This will be dangerous for livestock production in Vietnam because the productivity of the domestic husbandry industry is low.

Muoi said that in the future when Vietnam joins the Trans-Pacific Partnership Agreement (TPP), local producers will have to cope with even more difficulty because they will have to deal with countries with a major agricultural sector, such as the US.

Vietnam cannot export cattle meat because the livestock production cost in Vietnam is higher than other countries, while the productivity and product quality are uneven.

Mr. Nguyen Lam Vien, CEO of Vinamit, said local firms should cooperate with foreign partners through the use of existing distribution networks.

Economic expert Nguyen Minh Phong said that removal of tariffs in some sectors would be favorable. Businesses will be able to reduce costs and improve competitiveness.

He said in terms of goods structure, Vietnamese companies will be less competitive because they must depend on imported raw materials. However, to export their products to the ASEAN market, local producers only need to maintain low production costs.