VietNamNet Bridge – China has warned that it may close some border gates it shares with Vietnam, claiming it as intended to strengthen its supervision of trade activities. However, economists believe this is just a hollow threat.

VietNamNet Bridge – China has warned that it may close some border gates it shares with Vietnam, claiming it as intended to strengthen its supervision of trade activities. However, economists believe this is just a hollow threat. 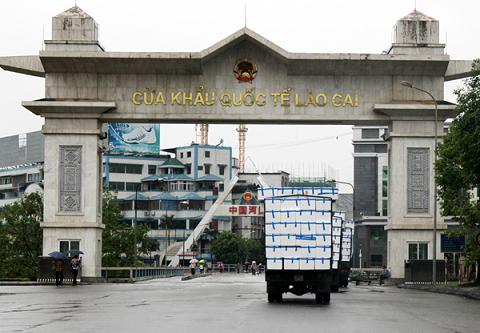 The information, released by Deputy Minister of Agriculture and Rural Development Ha Cong Tuan at a press conference on June 27, has raised worries.

Though Tuan said the Chinese side is considering stopping goods exchanges at certain border gates so as to reorganize their trade activities, some analysts believe that China is threatening this as an economic sanction against Vietnam in the context of the current East Sea tensions.

In fact, Tuan affirmed that China many times in the past closed its border gates temporarily. “The Ministry of Agriculture and Rural Development will work with its Chinese counterpart on measures to minimize losses,” Tuan said. “However, risks have always been latent when doing business with China”.

Tran Van Hung, Head of the Coc Nam Customs Sub-agency in Lang Son Province, noted said if China halts trade with Vietnam through some important trade corridors such as Tan Thanh, Huu Nghi and Coc Nam, Vietnamese farmers would suffer. However, Hung said, if trade is blocked only at some auxiliary border gates, the effects would be minimal.

Meanwhile, Dr. Vo Tri Thanh, Deputy Head of the Central Institute for Economic Management (CIEM) said on NguoiLao Dong on June 30 that the Chinese move, if it comes to pass, would make Vietnamese farmers suffer, the most vulnerable economic sector in the society.

Thanh believes, however, that this would not affect Vietnam’s GDP growth.

Thanh also does not think that China would indeed close a series of border gates, because China understands that the move would do harm to itself as well, as it would be breaking regional and international commitments.

“I believe that China has just made a minor threat to explore Vietnamese reactions,” Thanh said on VTC News. “In the past, China has taken similar actions to ‘forewarn’ Vietnam. However, the actions have been taken more regularly in recent days, with tensions in the East Sea escalating daily.”

When asked if the current situation is similar to that of 1979, which erupted into a border war between Vietnam and China, Thanh said the circumstances in 1979 and now are quite different.

“In 1979, the closing of border gates was inevitable in the context of the war. But if China were to do this now, it would be violating the commitments it made before, for which Vietnam can take legal procedures against it,” Thanh said.

However, Chien said China has been trying to strengthen its control over the transport of goods through trails, because it thinks < only illegal good are being conveyed through those channels.