The Chinese foreign ministry spokesman put forward a number of wrong and dangerous arguments to defend the country’s recent test flights to a reef in the East Sea, the Civil Aviation Authority of Vietnam (CAAV) has said.

The Chinese foreign ministry spokesman put forward a number of wrong and dangerous arguments to defend the country’s recent test flights to a reef in the East Sea, the Civil Aviation Authority of Vietnam (CAAV) has said. 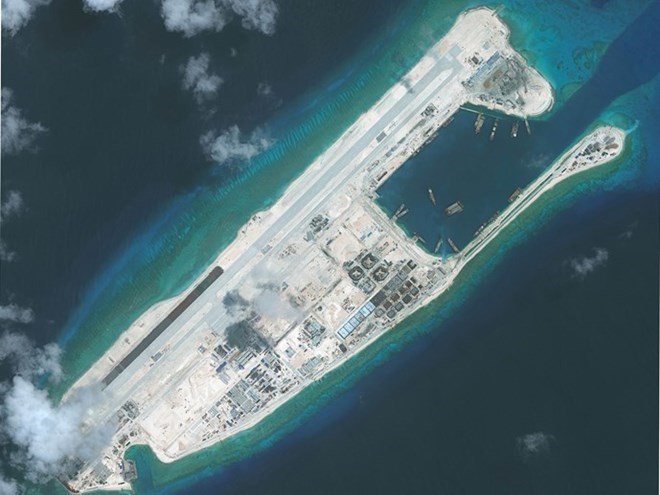 He stated that China’s test flights to the newly built airstrip on the so-called Yongshu Island, which is internationally known as Fiery Cross Reef, were activities totally within China’s sovereignty.

That statement intentionally asserted that the air corridor from China’s Hainan Island through the Ho Chi Minh FIR to Fiery Cross Reef was within China’s air sovereignty. It is completely false and groundless and directly imperils the civil aviation’s normal activities and safety over the East Sea, the CAAV said.

China also declared that its planes’ flights into and across international air routes, which were set up by relevant countries and the International Civil Aviation Organisation (ICAO), were totally within the country’s freedom and exempt from international civil-aviation rules.

Such a declaration has clearly provoked Vietnam and the international aviation community’s deep concerns over a nation’s responsibility towards ensuring aviation safety, the CAAV said.

The CAAV completely rejected Chinese spokesman Hong Lei’s statement on January 11 and determinedly opposed this action, the authority noted, demanding the Chinese side’s immediate cessation and that it not to repeat similar flights. They should have practical and concrete actions to help maintain aviation safety over the East Sea.

Vietnam’s aviation management agencies are exerting efforts to closely monitor and guarantee the absolute safety of normal flights in the FIRs under its management, the CAAV added.

Additionally, the CAAV and the Vietnam Air Traffic Management Corporation checked official documents, messages, faxes, emails and telegrams at all relevant agencies and units listed in Vietnam’s Aeronautical Information Publication and the phone call history of Vietnam’s relevant air traffic services units from 0:00 am of December 28 to December 29.

There were no notifications of the above-mentioned flights sent by the Chinese Embassy, as the embassy had stated, the CAAV emphasised.

The authority added that the Chinese diplomatic agency’s notification to a Vietnamese diplomatic agency could not replace the proper announcement of flights, nor the correct establishment of contact with the air traffic services provider, in a controlled airspace.