VietNamNet Bridge – Circular debt in the civil engineering sector has become so serious that it is believed to pose an existential threat to some construction companies.

VietNamNet Bridge – Circular debt in the civil engineering sector has become so serious that it is believed to pose an existential threat to some construction companies. 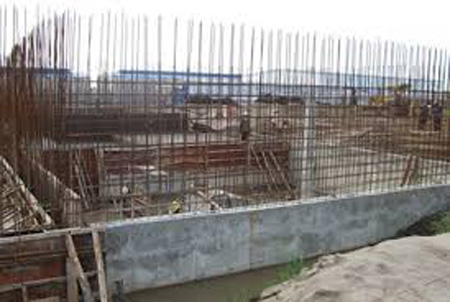 Construction firms are facing shareholders’ anger when reporting huge accounts receivable at shareholders’ meetings. For some companies, the debts owed them amount to over 30 percent of their total assets.

Reports of the 10 construction companies with the highest turnovers in 2013 showed that their total accounts receivable have reached VND19.550 trillion. Fully half of the enterprises have accounts receivable to total assets ratios exceeding 30 percent.

Most of the members of the “Vinaconex family”, the biggest Vietnamese construction group, are facing this problem. Finance reports of the 10 Vinaconex subsidiaries showed that they still need to collect VND2.58 trillion from their partners, which accounts for 34 percent of the total assets on their books.

Of the members, VC5 has the biggest accounts receivable, amounting to 60 percent of its total assets. The figure is 40 percent for VC6 and V15.

As the subsidiaries still cannot collect the debts, Vinaconex has had to declare the huge accounts receivable, worth trillions of dong, on its annual finance reports. The 2013 report disclosed that the sum of money it has yet to collect from clients reached VND4.41 trillion.

In what is perhaps the most worrisome sign for shareholders, the finance reports released by the Vinaconex subsidiaries all asserted that their partners cannot pay their outstanding debts largely because they are unable to collect on their own accounts receivables.

Circular debt occurs when A owes B, who in turn owes C, who owes A.

Exacerbating the problem, investors, contractors and suppliers are all being repeatedly pressured by commercial banks to pay their debts, putting them even further on tenterhooks.

Analysts, ringing the alarm bell over the debt circle, are warning that the involved parties in the supply chain are putting themselves at risk of failing, one after another, in what amounts to a domino effect.

In most cases, investors do not advance money to contractors for the projects’ implementation. Therefore, contractors have to borrow from banks to cover their daily expenses and have to pay interests on the loans.

PVX, one of the 10 construction companies with the largest turnover, has reported an accounts receivable worth VND1.3 trillion. It is foreseeable that PVX may have to go to great lengths to collect on its billings in a timely manner, because most of the projects it has worked on are state-funded. As such, the company’s debt collection process heavily depends on disbursement of state capital.

The Hoa Binh Construction Company (HBC) and Conteccons (CTD) are leading private companies in terms of accounts receivable. The latest financial report of CTD revealed that the firm’s accounts receivable have reached VND2.036 trillion, equal to 44.5 percent of its total assets. This means that nearly half of the company’s assets is lying under the construction works.

A senior executive of the company said that their success in debt collection depends on bank loan interest rates and the performance of the real estate market. Only if the investors can sell apartments, will they be able to pay their debts.