In May, the sun was burning hot in the northwestern region. The hot and dry westerly winds from Laos were calm. Trees were dormant. If it rained, it was accompanied with whirlwinds. 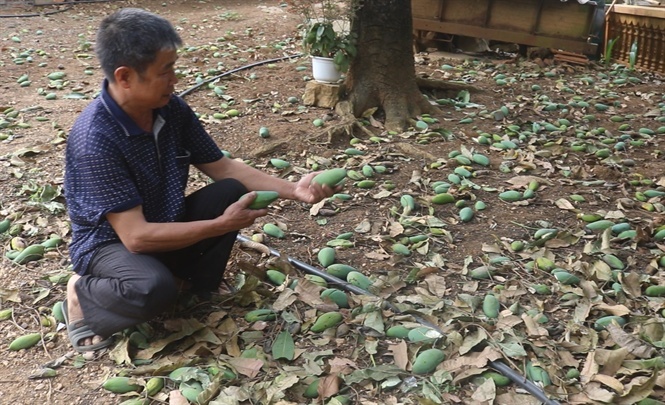 Un, 70, the village patriarch of Co Liu Hamlet in Muong Phang commune in Dien Bien district, looked into the sky, and said: “When the moon looks like this, the drought will last a long time and rain will come only much later.”

“I feel anxious when seeing longan trees close to blossoming, because this means big floods,” he added.

However, there have been only two rains since Tet which were not enough to wet the soil. As a result, the rice fields in the mountainous districts of Son La, Dien Bien, Lai Chau and Hoa Binh are dry, while maize and cassava have not germinated. Even wild sunflowers are also withering under the sun.

Another lean year is foreseen in Hat Lot and Mai Son areas. Under the scorching sun, mango stalks have died. A local woman told reporters that the in the mango garden of Nguyen Quang Manh in Nong Xom, 5,000 square meters, mango fruits were wrapped in plastic bags, but they still fell down.

Picking up a mango on the ground, Manh complained: “You see, mangoes fell before they became mature.”

According to the agriculture sub-department head Cam Van Thang, there are 6,400 hectares of fruit trees in Mai Son district, including 1,800 hectares of mangoes.

“Mangoes have been falling en masse because of prolonged drought. In previous years, there were 2-3 rains in April. But there is no rain this year,” he said.

Those who come to the northwestern region these days will see ‘dead hills’. The soil cannot be cultivated, so trees cannot grow.

According to Dao Duc Thuy, who has spent 20 years studying hydro-meteorological in Dien Bien, in the past, there were only two distinct seasons, the rainy season and the dry season.

The rainy season started in April and ended in September or October. The average annual rainfall was 1,600mm-2,000mm. As there were many rains of 200-400mm/day, flash floods occurred regularly.

But things are different this year, when the rainfall was 10-20 mm monthly in January-April. There were months under 10mm. The total number of sunny hours in the Northwest is between 1,800 and 2,000 hours and there is no month with less than 100 sunny hours.