Colourful antique collection for the ages

When visiting Huynh Huu Loc’s woodennbsp;house in the early morning, you can see a Buddha statue in a mysterious dark-blue colour preserved solemnly at the centre of the house. 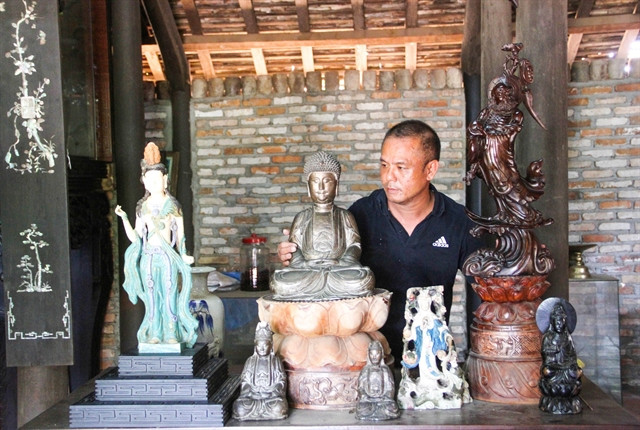 Huỳnh Hữu Lộc with some of his many ancient statues.

But as the sun gets higher, that dark-blue changes to pale yellow at noon, then to puce as the sun goes down.

The bronze statue, whose full name is Avalokiteśvara Bodhisattva – Tantra – Vajrayana, has a height of 52cm, an average diameter of 17cm, weighs 9kg, can change colour depending on weather, and is one of the most, if not the most precious antique among Lộc’s storied collection.

Moreover, in the morning, the statue shifts from black to dark-blue and then to blue-grey. By midday, when the temperature is high, it turns pale yellow and blue-violet. Before sunset, the statue switches to puce, then gradually changes to purple-red and smoke grey before returning to black at midnight. It’s like watching a miracle. The famous Buddha statue has the ability to change colour according to the weather and temperature. Photo nld.com.vn

According to Lộc, the Buddha statue, alongside many of his prestigious antiques, is a national treasure handed down by his father Huỳnh Minh who used to work in the Huế Imperial Citadel.

“I collect these antiques with passion and want to preserve national cultural values,” Lộc said.

“My family was originally from Huế, but due to historical events, my whole family left and moved to Nha Trang, Khánh Hòa Province. In 2012, before his death, my father handed over his entire inheritance, including this bronze Buddha statue and a censer which was also made of bronze. He called them treasures and asked us to preserve them with our hearts as these antiques have far more value than gold.

“Many people in the US and France contacted me to buy them, but I told them they are not for sale as I can’t let these artefacts go outside of Việt Nam.”

Besides the Buddha statue, Lộc’s antique collection also includes a unique amber sculpture that he calls “Thousand-year-old amber tree”. This is an extremely rare piece of amber that has a very special bright red colour when illuminated.

“Through my journey, I was lucky when a family in Huế agreed to hand over this precious amber figure,” said the 46-year-old collector.

“This amber sculpture dates back to the reign of King Khải Định (1916-25). It was very elaborately crafted by artisans in Huế, and has beautiful veins like a thousand-year-old pine tree. This collecting journey is very arduous because it’s not easy to convince others to hand over their heirlooms as they never want the antiques to fall into the wrong hands.”

Lộc is also the owner of an Avalokitesvara statue made of golden amber and many other rare antiques including a set of three statues called "Tam Thế Phật" (Three Buddhas), which is said to date from the Trần Dynasty (1225-1400) with an age of around 600 years. To ensure the rarity of his collection, Lộc has invited cultural researchers in Việt Nam to visit and give initial comments and assessments. A famous bronze casting artist in Hà Nội has seen his colour-changing Buddha statue and estimated that it is at least 200 years old.

The artist said that because it was made with colour-changing bronze material, which was a long-lost material for many years, such a statue is extremely rare, not only for Việt Nam but across the world.

Following  Lộc’s story, Venerable Thích Từ Thiêm from the Việt Nam Buddhist Sangha in Đà Nẵng City, who is worshipping some 200 ancient statues at Phổ Đà Pagoda, said that such precious Buddha statues must likely to be found only in royal palaces and worshipped in the Huế imperial Citadel during the Nguyễn Dynasty (1802–1945).

For the people of Khánh Hòa, Lộc’s reputation for collecting valuable antiques has made him more and more popular and widely respected.

“The scientific study of the above-mentioned antiquities is really complicated and requires assessments from experts.”