VietNamNet Bridge - According to a survey conducted by the Vietnam Chamber of Commerce and Industry and the World Bank, a large number of people (47%) expressed concern at the increasing gap between the rich and the poor in Vietnam.

VietNamNet Bridge - According to a survey conducted by the Vietnam Chamber of Commerce and Industry (VCCI) and the World Bank (WB), a large number of people (47%) expressed concern at the increasing gap between the rich and the poor in Vietnam. 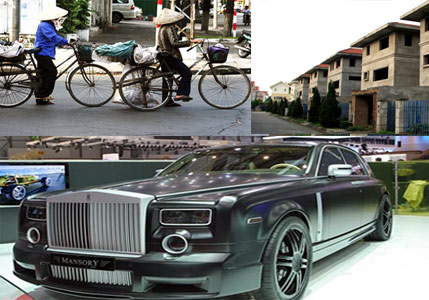 However, 63% of the survey participants believed that future generations would have a better life. Only 1/5 of the respondents were satisfied with the current economic situation of the country.

These are the results of the report “Vietnam in Transition – Changing Attitudes to the Market and the State" (CAMS) in 2014.

The report reflects comments of Vietnam business community and other groups of individuals about the process of transition to the market economy in Vietnam.

With more than 1,600 respondents, the survey showed strong support to the market economy model (89%), private ownership in the economy (71%) and transparency in the process of making and implementing policies in Vietnam (94%), a slight increase compared with the CAMS 2011 (87%, 69% and 92%, respectively).

The 2014 survey found that people who participated in the survey praised the quality of some public services provided by the private sector (health, education, notaries, public transportation). At the same time, the policy to transfer some public services to the private sector was warmly supported by the overwhelming majority of the survey respondents (99%).

Regarding the speed of economic reforms, only 29% of the respondents said the speed of transition to the market economy in Vietnam in the past five years was fast, while 36% said it was slow.

Obviously, the process of shifting to the market economy is undergoing but the pace is under expectations.

Most of the supporters of the market economy still wanted to have the state’s intervention to stabilize the prices of essential commodities. This percentage was 75% in 2014, up 7% compared with 2011.

Perhaps the operation of the market economy in Vietnam has not really built confidence and brought about positive effects for society, such as creating competition and promoting price reduction and improving product and service quality, so people expect the intervention of the state.

Approximately half of the participants said that prices of essential commodities were determined by the market, while the rest said prices of majority commodity groups are governed by the provisions of the state. However only 47% rated the program as effective.

Only 19% of respondents appreciated the contribution of large State-owned enterprises (SOEs) in the economy as positive/very positive, while the negative rating was 29%.

Only 1/5 of respondents were satisfied with the current economic situation of the country. Also a large number of people (47%) expressed concern at the increasing gap between the rich and the poor in Vietnam. Still, 63% of participants believed that the future generations will have a better life.

Dr. Vu Tien Loc, VCCI Chairman said: "This result shows that the reforms that Vietnam is carrying out is suitable with the needs of the majority of people and businesses. However, the survey also finds remarkable aspects, such as the great expectations about the role of the State in controlling prices, the state-market economic system, and assessment of the effectiveness of the SEO reform program.... "

Loc said the survey would be an important indicator for policymaking agencies and research institutions to promote research programs and specific actions in order to operate the Vietnamese economy in the right direction, improving the quality of life for every citizen of Vietnam.