VietNamNet Bridge – The National Assembly (NA) did not approve the revised Land Law on the final day of the NA session as expected.

VietNamNet Bridge – The National Assembly (NA) did not approve the revised Land Law on the final day of the NA session as expected. 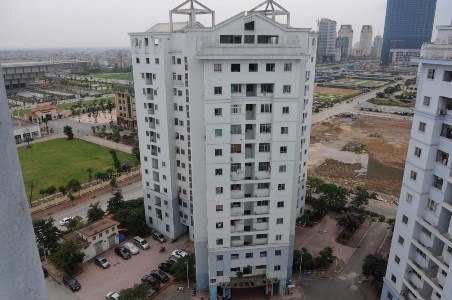 On June 21, 292 out of 348 National Assembly deputies propsed to postpone the approval of the revised Land Law.

On June 21, 292 out of 348 National Assembly deputies proposed to postpone the approval of this bill. The law will be ratified at the year-end session in October, to take effect from July 1, 2014.

According to the NA Standing Committee, the revised Land Law is a very important bill, which has major impacts on economic and social life of the country and the people. Some of the contents are related to the draft amendment to the 1992 Constitution.

Meanwhile, the draft amendment to the Constitution has been revised on the basis of people's ideas, the opinions of NA deputies and relevant agencies.

Therefore, the UN Standing Committee asked the NA to approve the revised Land Law after ratifying the amending Constitution in October.

According to the NA Standing Committee, from now to October, the relevant agencies will have more time to study and finalize the draft Land Law and better prepare guiding decrees for the implementation of the law in order to ensure the viability of it.

The 13th National Assembly concluded its fifth session in Hanoi on June 21.

The legislative leader praised and thanked people both at home and abroad for their response and opinions to the draft amendments to the 1992 Constitution.

At the session NA, deputies discussed the contents of the revised Constitution, especially issues regarding the nature of the State and the political system, people’s right to mastery, human rights and rights in association with citizen obligations, he said.

Chairman Hung required the Committee for Drafting Amendments to the 1992 Constitution, relevant agencies and organizations to strictly study and acquire deputies’ ideas while continuing to collect public feedback until September 30, 2013, to finalize the draft revised Constitution, which will be submitted to the NA for approval at the sixth session.

During the session, the legislature conducted the first-ever vote of confidence to assess the performance of officials it elected or approved.

The vote took place in a democratic, open and transparent manner, he said, noting that its outcomes reflect the country’s socio-economic development, national defense, security, foreign relations and judicial activities.

On the last working day on June 21, the legislative body approved a number of resolutions, including a resolution on inspection outcomes over the implementation of the Law on Thrift Practice and Wastefulness Prevention -- in using Government bonds for infrastructure construction in the 2006-2012 period and a resolution on the NA hearings.

The fifth session saw the discussion and approval of many important contents in the fields of legislature and supervision, and decisions on many significant issues.

Its success has contributed to affirming the Party and State’s resolve in curbing inflation, stabilizing the macro-economy, ensuring social welfare, maintaining political stability and reasonable growth, and creating momentum for growth in the years to come.