Vietnam has logged an additional 50 coronavirus cases in three localities nationwide during the past 12 hours, with Ho Chi Minh City alone recording 40 cases, according to the Ministry of Health (MoH). 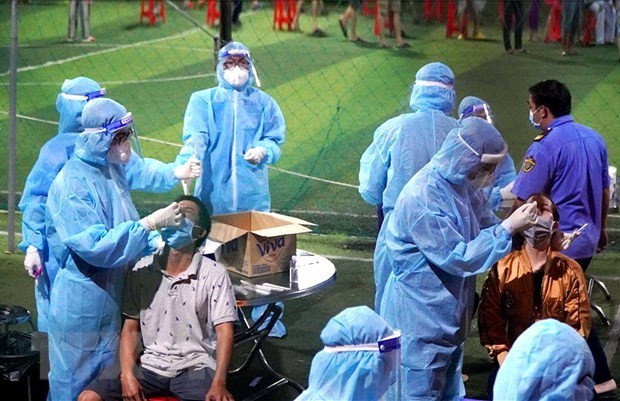 The fresh outbreak in HCM City remains complicated as it is yet to show signs of waning despite bold measures.

Among the 40 new cases, 18 were those in close contact with COVID-19 patients, and 18 were linked to the outbreak at Tan Phu Trung industrial park. However, the sources of infection of three other cases are unknown.

With chains of transmission of unknown origin detected, the municipal administration has decided to test five million people in all districts and towns over 10 days, starting on June 26.

During a fact-finding trip to the city on the same day, Prime Minister Pham Minh Chinh asked the Ministry of Health to transfer rapid antigen test kits to HCM City to carry out the extensive testing campaign.

Elsewhere, seven new cases were documented in Long An and three others in Bac Giang.

Vietnam has confirmed 11,995 cases, including 34 deaths, in 44 cities and provinces across the country since the resurgence of the virus in late April 2021.

The healthcare sector is speeding up vaccination, considering it an effective way to halt the spread of the virus.

Approximately 3.3 million doses of the COVID-19 vaccine have been administered nationwide since the vaccination campaign was launched in March.

The north-eastern border province of Quang Ninh has been selected to receive foreigners, providing that they hold a vaccination certificate known as a vaccine passport.