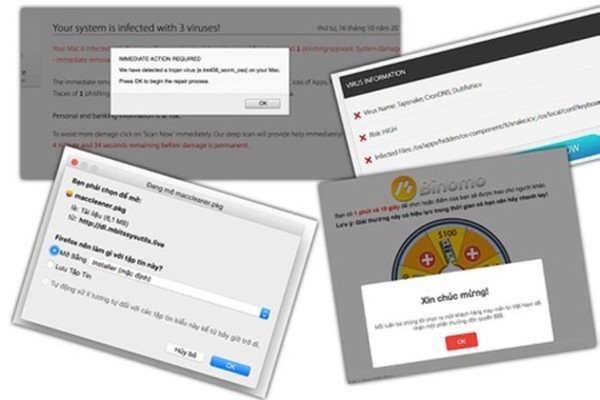 Viruses are easily spread in local as well as international networks and gravely threaten the cyber security in the nation.

According to the Government Cipher Commission of Vietnam, the cyber security status of Vietnam in the upcoming time is quite complicated and worrying, considering growingly serious cyber attacks in the near future.

Statistics from this commission reveal that since 2013, there have been more than 10,000 security vulnerabilities in network systems of state offices found and fixed. Among them, 6 percent are considered extremely severe, and 23 percent highly risky. More than 2,400 unnecessary online services have been activated, along with over 100 pieces of malware having encrypted strings with the formal governmental domain name, 10 pieces of malware downloaded by users in governmental domain names, and more than 2,100 state email accounts illegally hacked.

Head of the Center for Information Technology (IT) and Cyber Security Monitoring Tran Duc Su (under the Government Cipher Commission) stated that there are a variety of cyber security risks, ranging from human factors to IT equipment and service use, to information organization and management methods.

“The central government and related ministries and industries have issued several documents and guides to increase the security on state secrets, yet the risk of information lost is still alarmingly high, gravely threatening the national security and sovereignty”, said Mr. Su.

The Government Cipher Commission reported that in the upcoming time, the cyber security situation in Vietnam will become even more complicated since cyber attacks will use AI technology and focus more on e-commerce systems or banks to steal users’ confidential information. These attacks will also aim at IoT devices, smart city structures or current infrastructure to spread harmful information or tarnish the repute of certain subjects.

One truly serious issue in Vietnam is the illegal installation of software in many businesses and organizations, without proper use of cyber security tools. Therefore, these computers become more vulnerable for cyber attacks, mostly malware. Although many companies have already installed legal anti-virus software, they still do not equipment their staff with synchronous solutions to ensure information security, leading to a very low level of security.

Understanding this fact, in the period from 2013 – 2019, the Government Cipher Commission has implemented comprehensive technical solutions to protect information of state leaders as well as the Central Party’s and government’s guides in major state communication networks.

At the moment, the Center for IT and Cyber Security Monitoring is monitoring information security for 20 official IT networks of the Party and the government.

“100 percent of information security warning have been timely received and successfully handled. There have been no serious problem happening for critical state networks”, said Mr. Su.

Since 2013, the information security monitoring system of the Government Cipher Commission has discovered over 4 million warnings on cyber attacks to state critical IT systems, 1.4 million of which are about security vulnerabilities (accounting for 34 percent), 358,684 of which about malware, and the rest about website attacks, digital portal attacks, password stealing. SGGP