When searching for top dishes to try in Da Lat in the Central Highlands province of Lâm Đồng, the phrase Banh can (custard cake) comes up a lot.

The dish is prepared by pouring the batter, which contains soaked rice and water, into small clay pots on top of a special stove. A small amount of egg is then poured into each of the pots, which are then closed so that the mixture can be grilled. 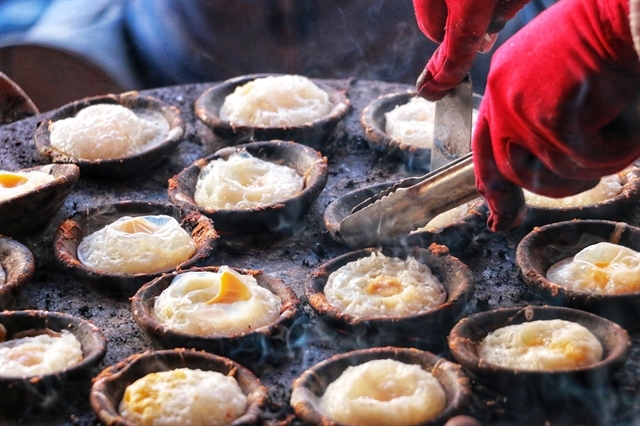 After the cakes are done, makers of Da Lat Banh can typically flip them over and place them on top of one another, like a miniature burger.

The dish is then served with cha (Vietnamese sausage) and a bowl of dipping sauce typically made with fish sauce, chopped onions and other seasonings, garnished with Vietnamese shumai meatballs. Restaurants in Da Lat often sell soy milk to be enjoyed with the dish.

I can see why Banh can is a must-try: the soft, creamy texture of the egg-filled cake and the crunchy outer crust pair well with the flavourful, rich dipping sauce and meatballs.

With reasonable prices of around VND30,000 (US$1.30), Banh can restaurants and vendors can be seen everywhere in Da Lat, often filled with locals and tourists.

Nguyen Yen Thy, owner of the 20-year-old Banh can Thy restaurant, said that her business can see up to 300 customers on peak days.

This restaurant once belonged to her mother, who began selling the dish at home as a hobby when she retired.

While famous in Da Lat, the dish did not come from the city and is said to have originated from the Cham community in Ninh Thuan Province. It is served in various southern central provinces in Vietnam, with each preparing the dish in subtle but different ways.

"In Da Lat, the dish is made from rice and eggs and served with fish sauce, shumai and sausage, not with shrimp or squid like places on the coast. The dish has a rich smell of eggs and rice, a lot more than in other regions," she said as she made another batch for expected customers.

Different regions have different methods of preparing the dipping sauce, according to Nguyễn Trung Định, a HCM City customer who was eating at Tăng Bạt Hổ Banh can restaurant, another crowded business in Da Lat.

"I think the dish is best enjoyed hot during Da Lat's cool weather," he added.

In fact, Banh can businesses in Da Lat prepare their sauce in various ways. One place may mix in a lot more chili and extra fish sauce to make the sauce even richer, whereas another will add a few small slices of sour mango to the broth, giving it a hint of fruity sourness.

"The dish is very simple, just rice flour mixed with egg, so in order to have a delicious dish, it's important to put your heart into making it. The rice flour and the eggs must be clean, and you must choose the best ingredients for the dipping sauce and shumai meatballs," Thy said as she took a short break before returning to serve her crowded restaurant.

Indeed, Banh can is a filling meal at a reasonable price, especially during the winter chill, and is one of Da Lat's not-to-be-missed dishes.