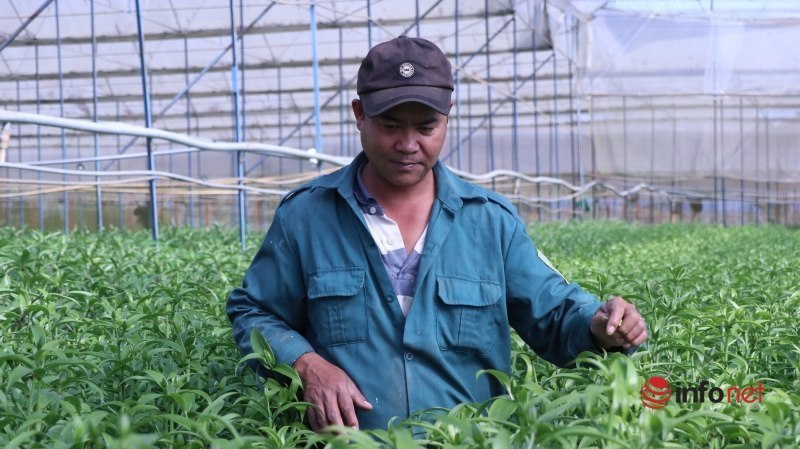 Flower growers in the village are preparing to harvest the biggest crop of the year. However, they are worried as merchants have not contacted them to discuss flower collection.

Nguyen Hung Vy is believed to be the biggest lily grower in Van Thanh who has 1 hectare of growing area. Vy and his family members have been growing lilies for 10 years.

They decided to reduce the growing area this year because of the pandemic and the heavy floods in the central region in late 2020, which all pointed to a lower demand for 2021 Tet.

According to Vy, farmers bear high risks when growing lilies, which requires high investment rate, and VND350-400 million per 1,000 square meters. If flowers don’t bloom during Tet days, they will incur heavy losses.

“Lily plants have become as tall as half a human body. We still have not found the method to stimulate plants for early or later blooming,” he said.

“Growing lilies is just like ‘gambling’. Unlike other types of flowers, growing lilies requires all the best, from varieties to cultivation techniques, and high investment,” he explained.

Vy said he was worried about sales. At the same time last year he received a lot of merchants who came to sign contracts. But now they have not turned up and the flower prices remain unclear.

“Merchants have not contacted us, so we still cannot predict how the flower market will be,” he said.

Nguyen Van Duc, a farmer in Ward 7, also said he grows 100,000 lily bulbs this year, half of that of the last year because he anticipates lower demand.

According to Duc, the investment rate for Tet flower crop is always 30-40 percent higher than other crops, because farmers have to spend higher on varieties and labor. As the investment capital is as high as billions of dong, Duc is worried about the sale this year.

Meanwhile, other families still maintain the same growing area for this Tet sale season. They think the demand will slightly decrease, while many growers have reduced their growing areas, so there will be a shortage. .

According to Nguyen Duc Hoc, chair of the Ward 5 Farmer Association, there are only 3 hectares of lily growing area for Tet sale in Van Thanh, or 70 percent lower than the last year.

A report from Da Lat City authorities showed that Da Lat has 1,530 hectares of flower cultivation area for 2021 Lunar New Year, including 16 hectares of lily area.