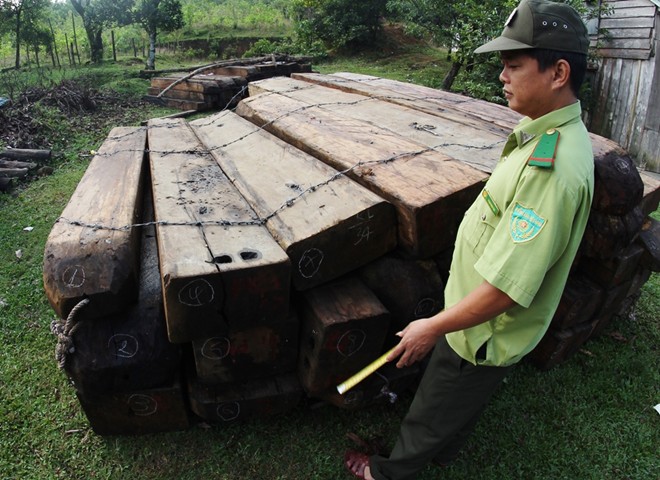 The first time was in 2014, when dozens of illegal loggers lived for several months in the adjacent sub-zones between Da Nang City and Quang Nam province. Reporters saw a huge volume of timber.

It was estimated that 154,360 cubic meters of wood were illegally exploited, worth VND4.2 billion.

The second time was on the first days of 2016. While the police and appropriate agencies were busy preparing the 2014 case for prosecution, illegal loggers had several months to continue felling trees in the Sub-zones No 12, 13 and 20 in the area adjacent to Nam Dong district of Thua Thien – Hue province.

Sub-zone No 20 was the area where the biggest volume of trees was chopped down. A local man said that since the construction of the La Son – Tuy Loan Road, it is now easier for illegal loggers to go to the forest to exploit wood and carry wood away.

From the main road which is under construction, reporters could see smaller branches of fishbone-shaped roads which link to places where there is precious wood.

“Illegal loggers have been living and sawing wood here for months, but the local authorities did not know about this,” said the local man, who led reporters to the site.

“There must have been very big old trees in the past,” he pointed to the stumps left in the area.

“We live next to the ‘golden forest’, but we are starving,” he said.

Why was the forest so devastated in front of forest rangers in the area which is just 3 kilometers far from Nam Dong district of Thua Thien-Hue province?

Phan The Dung, director of the Ba Na–Nui Chua SUF, blamed he unfavorable weather conditions. In November, when it rained heavily, forest rangers had to leave the Ta Lang – Hoa Bac Station and stay at Song Nam Station. Illegal loggers made the corrupt use of the weather conditions to fell trees.

Le Dinh Tham, head of the Hoa Vang district Forest Rangers’ Unit, when asked why the local authorities did not know about the deforestation, also attributed it to the complex terrain which was difficult to access.