The history of Da Nang and its relationship with the Hoang Sa Archipelago (Paracel Islands) will be introduced into the curricula at secondary and high schools in the central coastal city this year, officials have announced.

The history of Da Nang and its relationship with the Hoang Sa Archipelago (Paracel Islands) will be introduced into the curricula at secondary and high schools in the central coastal city this year, officials have announced. 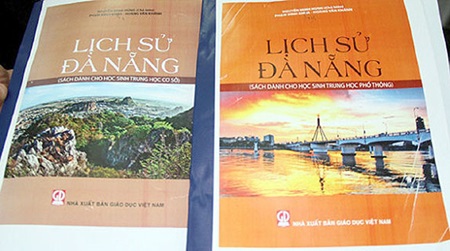 The history of Da Nang and its relationship with the Hoang Sa Archipelago (Paracel Islands) will be introduced into the curricula at secondary and high schools in the central coastal city this year.

About 100,000 school textbooks, divided into two volumes, have been printed and will be distributed in the schools.

The textbooks contain detailed information about the city's seafaring history as also Viet Nam's sovereignty over the islands that are currently occupied by China.

Titled Lich Su Da Nang (Da Nang History), the textbooks also include information on the illegal placement of a Chinese oil rig on the islands and the resulting confrontation.

Nguyen Minh Hung, deputy director of the Da Nang Department of Education and Training, said the idea for the textbooks was proposed by members of the city legislature, the People's Council, last July.

Hung said that the textbooks have seven and four lessons respectively for secondary school and high school students.

They will learn about the historical evidence that clearly prove Viet Nam's sovereignty over the islands, like the maps and documents dating back to the Nguyen Dynasty (1802-84).

The textbooks will focus in particular on the relationship between the Paracel Islands and Da Nang City.

It is important to compile such textbooks to foster the patriotic spirit among the city's youth, Hung said.

"As citizens of Da Nang, the students must remember and understand the most important historical moments of their hometown; and reinforce their pride and belief in the development of the city to promote the values of our ancestors," he said.

"It is a very meaningful and practical way to educate the students about Viet Nam's sovereignty over the Paracel Islands. It is even more important as the islands are under Da Nang's administration," said Huynh Dinh Quoc Thien, who heads the city's historians association.

For their part, students are excited.

Twelfth grader Phan Anh Dung from the Ngu Hanh Son High School said: "It would be great to have such textbooks in our curriculum. I think that we students must understand much more than anyone else about the Hoang Sa Islands, which are a part of our hometown."

Da Nang is home to thousands of Vietnamese fishermen, many of whom have been involved in ongoing attempts to defend Viet Nam's sovereignty over the Hoang Sa Archipelago.