Danang in top ten of must-see destinations in Asia

Danang City has been listed among the top ten most outstanding new emerging destinations in Asia in 2014, according to Agoda.com, the renowned hotel booking website of Asia.

Danang in top ten of must-see destinations in Asia 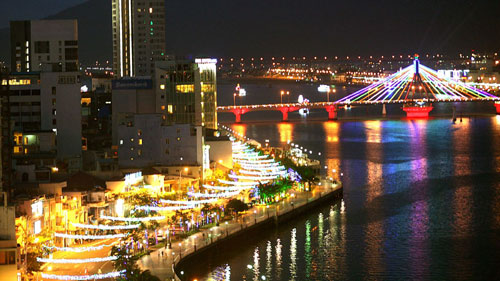 Danang City has been listed among the top ten most outstanding new emerging destinations in Asia in 2014, according to Agoda.com, the renowned hotel booking website of Asia.

Other Asian cities in the list include Okinawa and Osaka of Japan, Kota Kinabalu of Malaysia, Kenting and Kaohsiung of Taiwan, Chiang Rai of Thailand and Lombok of Indonesia.

Cities were selected based on criteria, such as booming tourism and reviews from tourism experts who specifically go on holiday to discover and experience the beauty of new destinations.

Vietnamese budget carrier VietJet Air has announced it will launch a new international route between HCM City and Singapore as of May 23.

The new route will provide 2,520 seats for passengers on 7 round-trip flights per week, according to a VietJet Air representative.

Desmond Lin, business development director of VietJet Air, said the opening of the new air route will meet the increasing demand of passengers wishing to travel, work, study and shop between the two countries.

As of March 20 passengers can book tickets via the VietJet Air website www.vietjetair.com, mobile phone at www.m.vietjetair.com, facebook at www.facebook.com/vietjetairvietnam, and the hotline 1900 1886, as well as at its booking offices nationwide.

On March 21, VietJet Air received an Airbus Sharket plane manufactured in Germany to expand its operation.

How to develop tourism closely linked to traditional craft villages was examined at a March 20 seminar in HCM City.

Vietnamese and foreign scientists and experts attending the event shared experience and work out solutions for tourism development in traditional craft villages.

Le Van Hung, a senior official of the Ministry of Culture, Sports and Tourism, pointed to the fact that visiting traditional craft villages is a type of tourism, yet it is spontaneous and has not matched its potential.

He raised concern over some shortcomings in developing such type of tourism, including poor transportation infrastructure and services, the hardship and poverty of artisans and the lack of coordination between local authorities and agencies in planning craft village tours.

All the participants agreed that Vietnam’s craft villages hold many traditional cultural values that can help promote tourism growth and contribute to diversifying products and services.

They looked at solutions for developing this type of tourism in the future, focusing on popularising brands, quality, improving infrastructure and customer’s services. They also considered a number of measures to boost trade promotion, human resource development and environmental protection.

The event was co-organised by Ho Chi Minh City University of Social Sciences and Humanities and Thai Silpakorn University.

The national flag carrier, Vietnam Airlines, together with leading travel agencies of Vietnam, are joining the 21st International Travel and Tourism Exhibition (MITT-2014) in Moscow, Russia, from March 19-22.

The event, the largest of its kind in Russia and the third largest in the world in term of its scale, drew the participation of more than 1,800 tour operators from 198 countries and regions worldwide.

Participating in the event, Vietnam aims to promote the country’s tourism in Russia, a market with a growth rate of nearly 300 percent during the 2011-2013 period.

In order to fully tap the potential market, the administration has partnered with tourism companies at localities to promote the image of Vietnam right in the country.

Vietnam is striving to welcome 1 million Russian holiday-makers by 2020 through offering a range of new tourism products, the official said.

Elena Vasilievna from Tolari company based in Ekaterinburg city said it is the hospitality, goodwill, beautiful beaches and improved services that have attracted Russian arrivals to Vietnam.

She suggested the country build more luxurious hotels to meet the increasing demands.

On this occasion, Vietnam Airlines announced that it will increase the number of flights from Moscow to Nha Trang city in the central coastal province of Khanh Hoa to three per week between October 26, 2014 and March 28, 2015.-