De Choat had an excellent performance and triumphed over competitors with the highest votes of 196,949. The second place went to G.Ducky who got 143,520 votes. 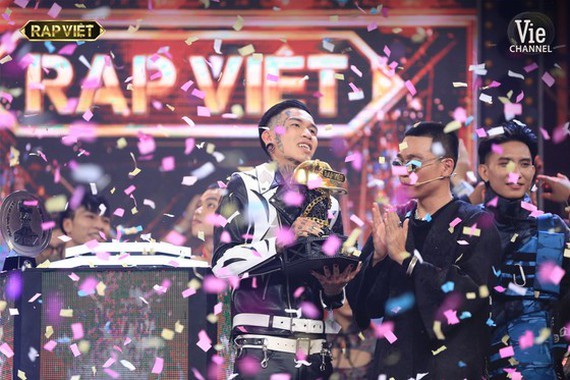 De Choat whose real name is Chau Hai Minh is a member of the rap band, Underground. He is also well-known as a Tatoo artist.
G.Ducky whose real name is Dang Mai Viet Hoang is a young talented rapper. Many fans regretted when he placed at the second position.

The first -prize winner received a cash prize of VND500 million (US$20,800) from the show’s producer, Vie Channel; the recording and release grant worth VND500 million from the Wanner Music Vietnam, and a 65 inch Smart OLED TV from LG Electronics.

There will be a one-billion VND grant for the releasing of the first music videos of contestants and a Rap concert scheduled to be held in the beginning of 2021.

The jury including Karik, Binz, Suboi and Wowy who are Vietnamese leading rappers selected 8 contestants for 16 performances in final rounds.

Rap Viet competition is the Vietnamese version of Thailand well-known reality television show, 'The Rapper”. Its final rounds was started on August 1 and weekly aired on channels of HTV2, Vie Channel, VTVCab1, VieON at 9.30 p.m. on Saturday.

For the first time, veteran theatre artists are on a par with young actors at the 2020 Mai Vang (Golden Apricot) Awards, one of the country’s most prestigious art awards presented by Nguoi Lao Dong (The Labourer) newspaper in HCM City.