Deputy PM, FM Pham Binh Minh referred to the prospects of Viet Nam, the nation’s relations with other partners as well as the importance of the World Economic Forum (WEF) on Viet Nam at his interview with the Reuters on January 22.

Deputy PM, FM Pham Binh Minh referred to the prospects of Viet Nam, the nation’s relations with other partners as well as the importance of the World Economic Forum (WEF) on Viet Nam at his interview with the Reuters on January 22. 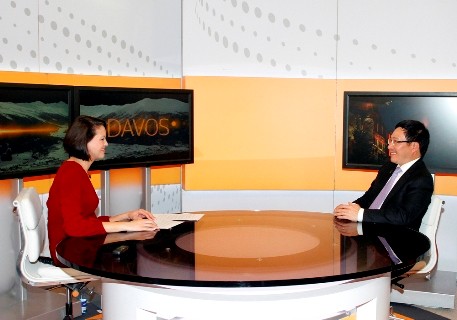 Viet Nam has established diplomatic ties with more than 180 nations, and has had Strategic Partnership and Comprehensive Partnership with a lot of partners, including the five permanent members in the United Nations Security Council, which has promoted the role and status of Viet Nam, he asserted.

He was optimistic about Viet Nam’s prospects of development with the goal of becoming an industrialized nation in the next decade.

In terms of the Vietnamese Government’s priorities to enhance the economic growth, Deputy PM Minh revealed that the nation’s economy recovered, achieving the growth rate of nearly 6% in 2014.

The Government set the goal of attaining a Gross Domestic Product of more than 6%, focusing on reforming State owned-enterprises, completing the negotiation rounds of some Free Trade Agreements (FTA) to create a favorable environment for development, stabilizing the macro-economy in accordance with curbing inflation and restructuring the banking system.

The Vietnamese leader added that the Government is concentrating on shifting growth model, heading to a knowledge-based economy and realizing three strategic breakthroughs.

Viet Nam has concluded the FTA negotiations with the Republic of Korea and the Customs Union of Russia, Belarus and Kazakhstan and expects to sign these agreements in 2015, he acclaimed, adding that eight FTAs were signed and six ones are under negotiations.

Deputy PM Minh also highlighted the role of WEF, regarding it as the chance for delegates to share initiatives and visions on global issues.

Regarding the Comprehensive Strategic Cooperative Partnership relations with China, he said that with two-way trade turnover reaching US$60 billion, China is the largest trade partner of Viet Nam.

Regarding the settlement of issues in the East Sea, he reiterated the country's consistent stance of addressing the issues through peaceful negotiations, based on international law, especially the United Nations Convention on the Law of the Sea 1982.