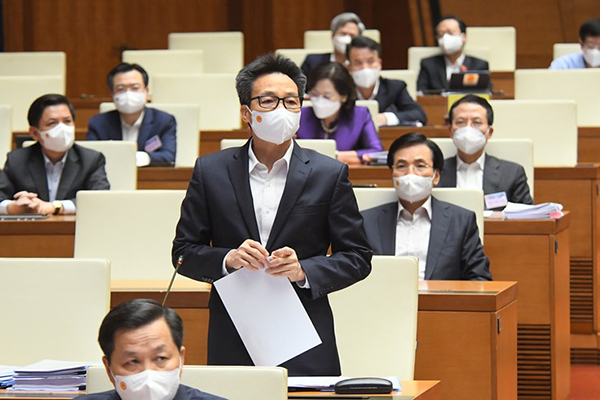 Dam, speaking at the National Assembly Q&A session on November 11, 2021 mentioned the departure of many workers from HCM City to their hometowns, saying it is necessary to apply necessary measures to attract workers who had left for their hometowns to return to work, and the interests of the workers and their families must be ensured.

He said that many problems were exposed during the fourth Covid wave, including accommodations for workers and welfare support.

The cabinet came to agreement on some principles and will submit to the National Assembly programs to solve these problems.

The matter of biggest concern is what to do in the next month.

The number of laborers moving between areas is 1.3 million, belonging to several groups.

First, laborers working under official contracts. These are part of a stable and long-term labor force, working at large corporations, especially in industrial zones (IZs) and export processing zones (EPZs). Most of them are in HCM City, Dong Nai, Binh Duong and Long An provinces and most received a part of salaries from employers while they were off work.

Second, laborers working in small enterprises, construction sites, or seasonal workers. In these cases, employers have not made commitments about calling workers back.

Third, freelancers who do not have official labor contracts. The number of these workers is very high, especially in HCM City.

Fourth, independent people. They come to HCM City and provinces to help their relatives who are factory workers to look after the workers’ children. They are not official workers, but it is necessary to take care of them.

Dam said for the people belonging to the second, third, fourth and fifth groups, there are two problems that need to be solved.

First, Covid needs to be controlled because people are afraid that after they return to work, they may have to stop working if an outbreak occurs.

Second, schools should reopen, especially preschools and primary schools. Workers may also want to have support for travel and guesthouses for a certain time.

Workers also want to get a part of their salaries and ensure that labor contracts will not be broken if a new wave breaks out.

Dam pointed out what needs to be done at the central level.

First, checking all the regulations on pandemic prevention and control to be sure they provide safety but are not too complicated. The regulations on testing and response to Covid cases and their close contacts need to be flexible.

“This needs cooperation from businesses who need to take care of their workers and not put all the responsibility on the government,” Dam said.

It is also necessary to set temporary regulations that are practical for businesses.

For example, a temporary special regulation on limiting the numbers of working hours within a month or within a year is being considered. Businesses are gearing up to implement orders to be able to deliver products on time for the year-end sale season.

Enterprises have been recruiting workers, including high-quality, mid-level and senior workers, to resume operations in the new normal period and prepare orders for the Lunar New Year.

Localities need to take the initiative in connecting people who want to return to their workplaces. A survey found that half of workers prefer freedom and don’t need the connection to local authorities. They go to HCM City and then think about where to apply for jobs.

“We need to help the other 50 percent of workers who want help connecting to enterprises by providing sufficient information and vaccinating them,” Dam said.

“I talked to some provinces’ leaders and realized that localities are willing to pay money to bring workers back to work, if there are connections,” he said.

In addition to aid packages, Dam proposed that MOLISA and localities consider specific aid packages for workers coming back to work.

He said that many people have to live in privately run boarding houses with very poor conditions. He asked localities to activate programs on building houses for workers and gradually restructure production and the workforce. Vietnam should not insist on developing a cheap workforce as an advantage in the future, he said.

National Assembly Chair Vuong Dinh Hue said the Government needs to clarify the responsibility of state management agencies in the migration of workers.

HCM City forecasts shortage of 60,000 workers in Q1 next year

HCMC may face a shortage of some 60,000 workers in the first quarter of next year if the Covid-19 pandemic continues unabated in coming months, according to the municipal Department of Labor, Invalids and Social Affairs.

In recent days, workers from the Central Highlands provinces are returning to HCMC, Dong Nai, and Binh Duong to continue their jobs because they know that social distancing has been loosened, and businesses have started to resume production.