Despite the 21 percent decrease in FDI decrease in Q1, Kizuna, which leases ready-made workshops in Long An province, is still moving ahead with its plan to expand production.

The company is hurrying to implement Kizuna – Ready Serviced Space project in Kizuna 3 area in Can Giuoc district. 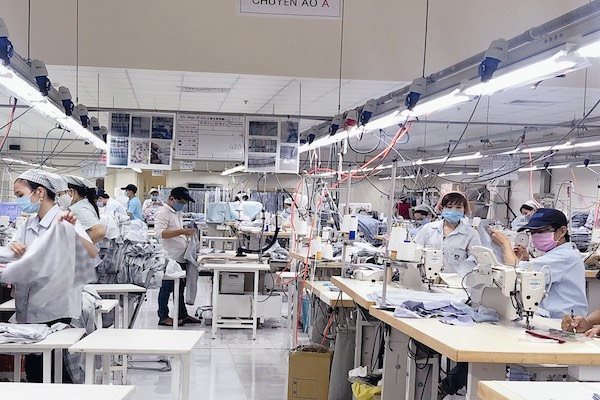 Once completed, the 80,000 square meters of ready-made workshops will be put into operation by Q4 2020, ready to receive FDI to flow into Vietnam in the post-Covid-19 period.

GSO reported that in the first three months of the year, Vietnam attracted $8.6 billion worth of FDI, a decrease of 21 percent compared with the same period last year.

However, this is not the reason for investors to stop their production and business expansion plans.

Shirakawa Satoko from Kizuna, in charge of Japanese and English speaking enterprises, believes that FDI would continue to flow into Vietnam if Vietnam can control the epidemic well and overcome the crisis at the lowest costs.

She believes that Vietnam would see a new wave of Japanese flocking to Vietnam, saying that the US-China trade war and Covid-19 will speed up Japanese enterprises’ process of diversifying activities to ease reliance on the Chinese market.

Most recently, Japan decided to reserve $2.2 billion of the country’s record bailout to help Japanese manufacturers relocate their production from China in the context of Covid having breaking up the global supply chain.

A survey conducted by Tokyo Shoko found that 37 percent out of 2,600 Japanese enterprises want to relocate their factories out of China.

Not only Japanese, but European countries are also considering leaving China. A new survey, cited by China Morning Post (SCMP), has found disappointing business results: half of polled businesses said their profit margin would decrease by 20 percent.

In late 2019, when the news about the US-China trade war topped all newspapers, leading US technology firms stated they were considering relocating production to Vietnam. Analysts believe that when Covid-19 ends, this will be the time for them to accelerate relocation.

Nikkei ASEAN Review reported that Google and Microsoft are eyeing Vietnam and Thailand for their production to make next-generation mobile phone models, laptops and other products.

Google is thought to make Pixel 4A and 5A models in Vietnam, while Microsoft plans to make tablets and PCs in the north of Vietnam.

Affirming that Vietnam remains attractive in the eyes of foreign investors, an analyst said the way the government of Vietnam has fought the epidemic is one of the factors that will persuade investors to come to Vietnam.

Since national reunification in 1975, Vietnam’s economy has grown from strength to strength. Senior economist Nguyen Mai writes about how the economy has developed in that time, with foreign direct investment serving as one of the key driving forces.