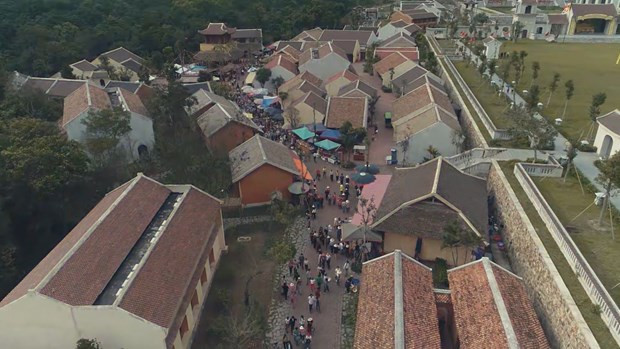 Setting foot in Nuong village of Yen Tu, visitors will be deeply impressed by the image of shops and stalls selling handicraft products of local trade villages such as conical hat making, Dong Ho folk  paintings, or bamboo dragonflies along two sides of the road cutting through the village.

In his six-day trip to discover the beauty of the northern region, Tran Hoang Dong, a tourist from the southern province of Dong Thap, travelled to Yen Tu. This is his second stop in Quang Ninh, after Ha Long Bay – a UNESCO-recognised World Natural Heritage. With only four hours in Yen Tu, he had not much time for Nuong village, but it was still enough for him to try making bamboo dragonflies and colouring them by himself. Determining that Vietnamese culture plays an important role in the process of building new and attractive tourist products, all stalls and craft village activities in Nuong village are associated with the common image of the village and suitable to the Vietnamese culture.

Tung Lam company will continue the search for suitable craft villages that meet the cultural, artistic and educational requirements to bring  to visitors attractive cultural experiences and high-quality products.
Yen Tu Mountain is located about 50 kilometres from Ha Long City. The area has awe-inspiring scenery, surrounded by ancient pagodas and hermitages.

It has been associated with the name and career of Buddhist King Tran Nhan Tong (1258-1308), who founded the Truc Lam Zen sect bearing the typical Buddhist culture of the Vietnamese people.

The third King of the Tran Dynasty ascended to the throne when he was just 21. He is famed for defeating Mongol invaders twice during his 15-year reign.

The King abdicated when he was 35 and spent the rest of his life in Yen Tu Mountain practicing and propagating Buddhism. He founded the first Vietnamese School of Buddhism called “Thien Tong” or Truc Lam Yen Tu Zen in the 1,068m-high Yen Tu Mountain. The 20,000ha site is considered the capital of Vietnamese Buddhism.

Besides numerous temples, it also preserves many old religious and cultural documents such as precious prayer-books and monks’ writings.

The northern provinces of Quang Ninh, Hai Duong and Bac Giang are joining hands to complete a scientific dossier on the Complex of Yen Tu Monuments and Landscapes in 2022, to seek UNESCO recognition of the location as a world heritage site./.
Source: VNA