Having researched and developed Vbee, the first app using AI to convert text to speech for Vietnamese, Nguyen Thu Trang from the Hanoi University of Science and Technology wants to bring Vbee to the digital voice market, which is estimated to have a value of $49 billion. 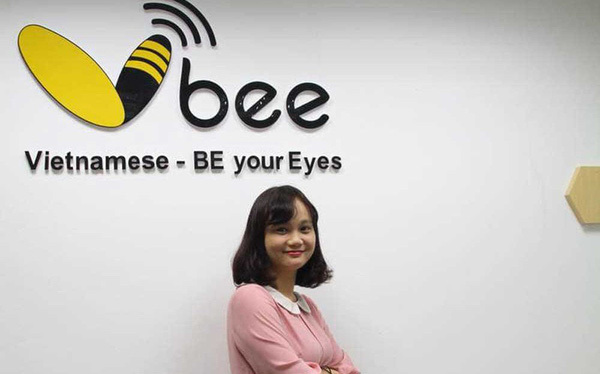 Vbee's slogan showed the initial purpose: Vietnamese - BE your Eyes, which means ‘we are your eyes’.

However, when they were developing the reader for the visually impaired, Trang and her co-workers discovered a high demand for an artificial voice.

After 10 years of research and development, Vbee now is focusing on text-to-speech technology with natural intonation and smart conversations dedicated to Vietnamese. This allows businesses and agencies to save costs and manpower for customer services.

Vbee is no longer just a tool for the visually impaired but has joined the artificial voice market. In fact, text-to-speech is one of the core technologies of VUI (voice user interface) in the 4.0 industry era.

A question has been raised whether Vbee has advantages compared with Google, Apple and Amazon. Trang affirmed that Vbee is the core solution and the first Vietnamese-language commercialized solution.

Vbee was developed by a team comprising doctors and engineers with great passion who experienced training and spent years working in developed countries, and have deep knowledge about voice technology.

“We have designed many optimal voice data sets, which can cover Vietnamese contexts and tone characteristics."

There are many technology firms which provide the service, but Vbee still has advantages - a quick response and good customization for a niche market.

Trang and her co-workers are focusing on developing Vbee to provide cloud API service (vbee.vn) to thousands of individuals and businesses, and apply it to customer care systems for e-commerce systems, banks, smarthomes, chatbots and content digitalization services (aicallcenter.vn).

Trang is optimistic about the future of Vbee, saying that the digital voice market has huge value of $49 billion and VUI appears in everyone's fixtures and appliances.

Vbee has received funding of VND10 billion from VinTech Fund. In the first funding campaign, Vintech Fund provided VND86 billion to 12 outstanding projects in science and technology. The Vbee funding was the highest.

When she was a student, Nguyen Thi Thu Trang was part of a volunteer group that made audio books for visually impaired people.

The AirVisual app, whose data indicated that Hanoi has at times topped its list of 90 major global cities suffering from air pollution, has been restored for download on Google Play and Apple’s App Store in Vietnam.