‘Chau, Beyond the Lines’, a documentary on Vietnamese Agent Orange victims, directed by Courtney Marsh, has been listed as of top 10 documentary short subject contenders for the 88th Academy Award.

VietNamNet Bridge – ‘Chau, Beyond the Lines’, a documentary on Vietnamese Agent Orange (AO) victims, directed by Courtney Marsh, has been listed as of top 10 documentary short subject contenders for the 88th Academy Award.

According to the Academy of Motion Picture Arts and Sciences, five of which will earn Oscar nominations.

The 34-minute film tells about Chau, a teenager living in a Vietnamese care centre for kids disabled by Agent Orange, struggles with the reality of his dream to one day become a professional artist.

Courtney Marsh said that eight years ago, she travelled to Vietnam with a fellow filmmaker to make a documentary on the plight of street kids in Ho Chi Minh City.

When the American director entered a small Peace Camp for children with disabilities, she decided to film their lives which spanned out into her eight year endeavour.

‘I followed Chau because of his relentless pursuit for his dream to be an artist. He taught me to hope in a world where, most often than not, there is a lack of such. If we could all look at the larger picture, focus on what we have rather than what we don't have, perhaps our seemingly impossible dreams would be actually within our reach’, Courtney Marsh shares.

The nominations will be announced live on January 14 at the Academy’s Samuel Goldwyn Theatre in Beverly Hills.

Many suburban villas and houses have been left unused for tens of years with overgrown patches of grass overgrown. But prices are still very high.

Automobile sales down 42 per cent on chip shortage

The Vietnam Automobile Manufacturers’ Association (VAMA) has announced that its members sold 25,159 vehicles in June, down 42 per cent from May ending three consecutive months of gains.

Samsung plans to invest US$3.3 billion in Vietnam in 2022

The R&D center in Hanoi, scheduled to be completed by late 2022, would be Samsung’s major R&D hub not only in Vietnam but also the whole of Southeast Asia. 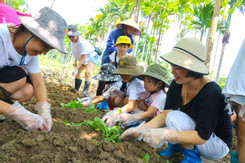 The program will preserve and promote traditional cultural values.

According to the Vietnam Environment Administration (VEA), air pollution in large cities is increasing with the harvesting season as straw is left on the field and burnt in the evening.

Leaving the fun behind, many young people in Ho Chi Minh City are joining in voluntary programs to remote areas. With their enthusiasm, youth, and knowledge, they are helping to transforming poor areas into places worth living.

The United States’ Department of Commerce (DOC) has officially initiated an investigation into trade remedy tax evasion on a number of steel pipe products imported from the Vietnamese market.

September 8 will become an annual day for honouring the Vietnamese language under a decision signed by Prime Minister Pham Minh Chinh on the approval of a project to honour it among the Vietnamese community abroad in the 2023-2030 period.

The people who spread kindness and love in the community

A man built a house for hundreds of old people, a woman donated her hair to cancer patients, and a man sang in the middle of cemetery.