The dollar price increases have put businesses on tenterhooks, though it is now just the third quarter of the year, while they would only need more dollars in the fourth quarter to make payment for the imports.

VietNamNet Bridge – The dollar price increases have put businesses on tenterhooks, though it is now just the third quarter of the year, while they would only need more dollars in the fourth quarter to make payment for the imports. 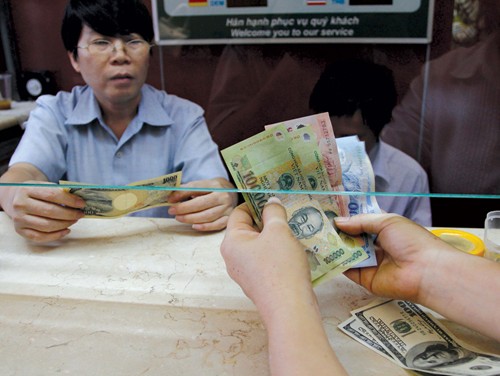 The demand for dollars loans soared by 2.5 times in the last week of June. The dollar supply reportedly became short in the interbank market. The State Bank of Vietnam stopped selling dollars to commercial banks. The dong/dollar exchange rate quoted by commercial banks hit the ceiling level at VND21,246 dong per dollar. All that factors have affected enterprises’ operation.

On July 6, the interbank exchange rate reached VND21,036 dong per dollar/ As such, commercial banks had raised the buy price by VND100 per dollar since June 28, the day when the dong/dollar exchange rate was made.

The continued dollar price increase has caused a big worry to businesses. They fear the dollar short supply would become more serious towards the end of the year.

In early 2013, the State Bank of Vietnam stated that the dong would not be devaluated by more than 2-3 percent this year. This means that with the central bank’s move of devaluating the dollar by one percent, the dollar still can be devaluated by another one or two percent.

In principle, the dong devaluation would benefit exporters. However, according to Nguyen The Lu, CEO of the Saigon Asset Management SAM, has warned that the dong depreciation would make foreign investors rethink their investments in Vietnam.

As the dong gets weaker, the profits they can make from their investment activities in Vietnam would decrease. Therefore, they would find it less profitable to make investments in the Vietnamese stock market.

Meanwhile, Nhan Huc Quan, General Director of Toyo Vietnam, the dollar price fluctuations would have big impacts on the enterprises which import materials for domestic sale.

With the exchange rate adjustment, businesses would have to bear high risks, because they always sign the contracts on goods supply for 3 months, while it is now the time businesses need big capital to gear up for the year end production season.

In the latest news, the State Bank of Vietnam has affirmed that no further dong depreciation for now. Meanwhile, VnExpress newspaper has quoted Truong Van Phuoc, General Director of Eximbank, as saying that the 1-1.5 percent dong further depreciation would be “Acceptable”.

The Director of a plastics company complained that it’s easier to sell dollars to banks than buying dollars from them. He said his company has to buy dollars on the black market at the prices higher than the prices quoted by banks.

Some other businesses complained they have to pay the “negotiable prices” when buying dollars from banks, not the quoted prices, over the last two months.