VietNamNet Bridge – The domain name market is taking shape in Vietnam. However, there are more sellers than buyers.

VietNamNet Bridge – The domain name market is taking shape in Vietnam. However, there are more sellers than buyers. 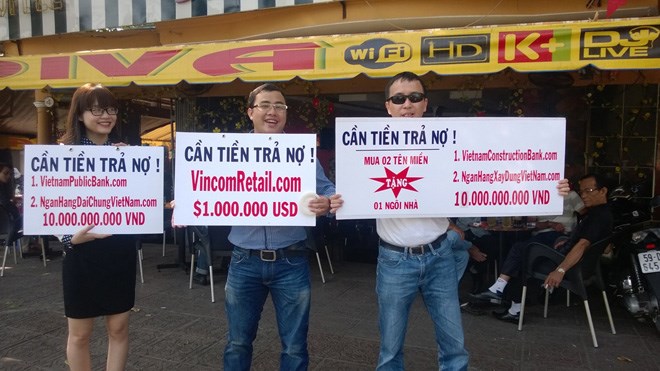 A group of people has been seen recently on the streets in HCM City with the plates on their hands which say they offer to sell domain names.

A group of people has been seen recently on the streets in HCM City with the plates in their hands which say they offer to sell domain names.

The group is led by Nguyen Trong Khoa, 38, a well-known name, called as “the domain name king” in Vietnam. The products on sale – the domain names similar to the names of the famous individuals and brands - are worth up to one million dollar.

“We are offering to sell domain names,” Khoa confirmed promptly when asked about the young men with the plates in hands. “It is not a surprise at all,” he added.

The plates really caught the attention of the passers-by. “I need money to pay debts. 1) VietnamPublicBank.com 2)NganHangDaiChungVietNam.com VND10,000,000,000”, a plate reads.

Especially, another plate informed that those who accept to buy two domain names would be given a free house. Khoa confirmed the “price”, saying that he would give the buyers a house in Phu Nhuan district, where he lives in.

Tran Ngoc Long, a local resident in district 7, said he thought the young men had “mental problems” when trying to hawk domain names around. However, Khoa affirmed that vending domain names is just a way of advertisement.

Instead of posting the news on domain name sale on mass media, Khoa decided to hawk domain names around to save money.

“I was trained as a marketing major, therefore, I like to follow new and strange business plans. The ultimate goal of a seller is to sell products,” Khoa said.

The violations of the laws?

Lawyers and analysts still argue about if the domain name sale is legal.

A lawyer said that Khoa’s domain names are similar to the names of the currently well-known brands; therefore, they may lead to misunderstanding and cause losses to the brands’ owners.

He believes that the behavior of Khoa serves his dark intention, for which he should be considered an imposter.

Meanwhile, Lawyer Nguyen Tri Duc from LAW 360, a law firm belonging to the HCM City Bar Association, affirmed all the institutions and individuals have the right to register the domain names “.vn” and international domain names, except the prohibited ones.

He also said that with the current “open” legal framework, individuals and institutions have been speculating domain names to transfer to those who have the demands.

Khoa has affirmed that he does not violate the laws. “A domain name trader will only be accused of violating the laws only in case they use the domain names coinciding with the well known brand names in their unhealthy competitions,” he said.