The move by some big bankers to slash interest rates has raised big worries to smaller bankers, who fear that the “dumping” in the monetary market would prompt people to unanimously withdraw money from banks to buy dollars, gold or pour into stocks.

VietNamNet Bridge – The move by some big bankers to slash the interest rates has raised big worries to smaller bankers, who fear that the “dumping” in the monetary market would prompt people to unanimously withdraw money from banks to buy dollars, gold or pour into stocks. 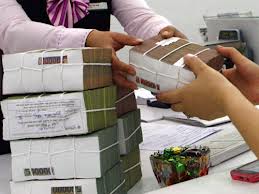 Vietcombank, once of the Vietnamese biggest commercial banks, on July 11 caused a big surprise when unexpectedly slashed the one month deposit interest rate to 5 percent per annum, a decrease of 1.5 percent. The new interest rate has been described as the “record low rate” at this moment.

The highest interest rate of the bank is 7.75 percent, applied to 6 month deposit.

Another big guy, Agribank, has also unexpectedly slashed the deposit interest rate to 5 percent per annum for one month deposit.

Meanwhile, the interest rates quoted by BIDV, also a big banker, by the afternoon of July 12 had stayed at 6.5 percent for one month deposit. The bank’s highest rate had been 8 percent for long term (more than 12 months) deposits.

Vietcombank has been well known as a big bank which had great advantages in mobilizing capital. Therefore, it is understandable why the bank has been pioneering in cutting the deposit interest rates.

Prior to that, in early May, the bank also caused a shocked when easing the dong deposit interest rate from 7 percent to 6 percent.

At that time, explaining the move, Vietcombank’s CEO Nguyen Phuoc Thanh said the move was one stone which targeted two birds. First, it would stimulate the demand, thus helping businesses clear their inventories. Second, the deposit interest rate reductions would lead to the lower capital cost, which would allow banks to ease the lending interest rates.

The latest move by Vietcombank, a big guy, has made people believe that a new wave of interest rate reductions would occur, when other banks have to follow Vietcombank to slash their interest rates.

Nguyen Tri Hieu, a well-known banking expert, has noted that slashing the deposit interest rates is a reasonable move which helps reduce the capital costs, thus making it easier for businesses to access bank loans.

Hieu does not think the banks violated the current regulations when setting up the interest rates which are up to 2 percent lower than the ceiling rate stipulated by the central bank.

However, he believes that only some small bankers can do this, saying that small banks dare not do that. The small banks always have to keep the deposit interest rates at high levels to retain depositors.

The deputy chair of a medium joint stock bank has expressed his worry about the possible interest rate reduction movement, saying that the continued reductions may hinder the cash flow to run into banks.

Some analysts have noted that after some big banks eased the interest rates to 6 percent per annum, many depositors have withdrawn deposits to pour into other investment channels – gold, dollar and stocks.

“By slashing the interest rates so sharply, the banks try to “dump” in the monetary market,” he commented.

“No one would deposit their money at banks when the interest rate is even lower than the inflation rate,” he added.

Once depositors rush to withdraw deposits, banks would lack capital. If so, they would have to raise the deposit interest rates to attract more capital, which is a “liquidity trap,” according to the banker.