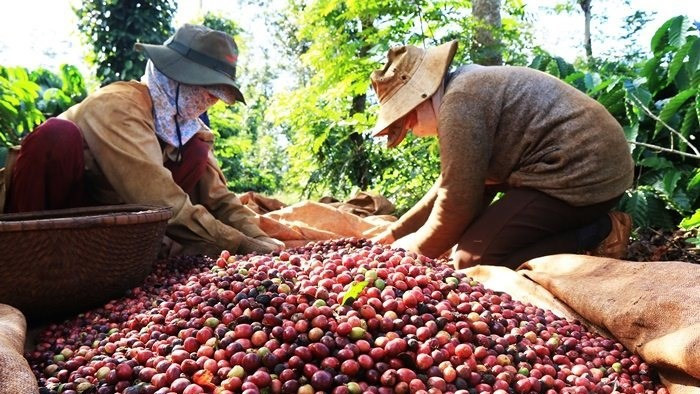 As the price decreases, farmers have restricted sales, resulting in short supply for export.

Covid-19 is raging in Europe and US, while restaurants and hotels in Italy, Spain, France and the UK have closed. They are all the key export markets for Vietnam’s farm produce, including coffee.

Do Ha Nam, deputy chair of the Vietnam Coffee and Cocoa Association (Vicofa) and chair of Intimex Group, confirmed that all the export shipments to Europe have been cancelled, forcing the prices down.

Vietnam is controlling the epidemic very well but exports won't resume if the COVID-19 exists in export markets.

“Rice remains the only farm produce item which still can prosper in the context of epidemic,” Nam commented.

As the coffee price has fallen to the 15-year low, farmers have choppef down coffee plants and are growing other crops instead.

Analysts believe that though the exports have decreased, the risk for farm produce is still lower than other production fields. The demand would soar again once the epidemic is contained.

Therefore, according to Nam, exporters need to prepare well for the post-Covid-19 period. “By that time, the demand will soar again and the prices will bounce back,” he said.

However, the problem now is that enterprises lack money to store goods while waiting for prices to increase again. Meanwhile, they need money to cover expenses to maintain operation and pay bank debts.

Vietnam's coffee industry had suffered from falling export prices, according to the Vietnam Coffee and Cacao Association.