Dying village: Groping on the path of integration

The President of Vietnam Craft Villages Association said the sense of artisans is limited and they do not have a global vision, while the artisans complained that they were not supported by the state so they could do business only on emotions.

VietNamNet Bridge – The President of the Association of Vietnam Craft Villages said that the sense of artisans is still limited and they do not have a global vision, while the artisans complained that they were not supported by the state so they could do business only on emotions.

Explaining the death of craft villages

Craft villages at the point of death

Taking a pair of bamboo chopsticks from the cabinet in a Japanese craft village, Mr. Luu Duy Dan, Chairman of the Association of Vietnam Craft Villages, said the price of this pair of chopsticks is up to $10. It is expensive but it is very nice indeed since the product almost retains the blue color of the original bamboo.

Workers of craft villages need to be trained 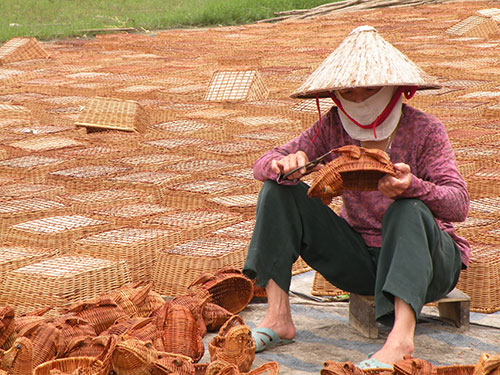 Artisans at Phu Vinh bamboo and rattan village, in Chuong My district, Hanoi, are worried about losing their jobs because they cannot sell products.

According to Dan, the country has about 3,500 villages, including 2,000 villages which have been recognized, 400 traditional villages of hundreds of years old, with 53 job categories and 200 types of handmade products.

The villages have created jobs for about 12 million workers after harvest time. However, many villages are facing difficulties such as lack of capital, market and production premises.

Besides economic downturn, there are other reasons for the depression of craft villages, such as the range of products is monotonous, poor in ideas, lack of assistance from the authorities, etc.

“The market for traditional crafts is dwindling due to high demand from the customers. They do not accept products made in small scale, of poor quality. We have to integrate into the world and not to maintain the old, outdated things," Dan said.

Mr. Hoang Anh Van Hanh, a skilled craftsman of Phu Vinh bamboo and rattan village in Chuong My district, Hanoi, was conferred with the title “Artisan” in 2009. With 28 years in the business, though he acknowledges that the village's products have been exported to many countries in Europe and Asia, but the product design is still monotonous while the packaging is unattractive.

For years, workers of craft villages, even senior artisans like Hanh, have designed products emotionally. "I think it is nice but the customers don’t like it and vice versa. To have nice and diverse designs, craftsmen must be trained in design, particularly by foreign experts.

“We're not conservative. Craftsmen are wishing to be supported by the state to be able to apply new technologies in production, especially in product design. As an artisan, I cannot design products that meet customer requirements," admited Hanh.

Investment in tourism at craft villages

Due to the difficulties of seeking the market, many craft villages have combined with travel companies to organize tours to their villages to witness the performances of talented artisans.

Mr. Le Van Chuong, an artisan in the ceramic village of Lu Ban in Khanh Hoa province, said: "Visitors come here very often! Every time we perform our skills for them, we earn some money. Many people asked us to do small ovens for them to take home as a gift."

However, according to Mr. Le Van Hoa, from the Department of Culture - Sports and Tourism of Khanh Hoa province, such tourism activities are spontaneous and in small scale, which do not highly benefit craftsmen.

Currently, the conservation of Lu Ban village is still in the research period. "In my opinion, to preserve and promote traditional villages, we need the hands of the community. The authorities should encourage tourism businesses to design tours to craft villages, with fees collection to support craftsmen," he said.

In Quang Nam province, Phuoc Kieu and Ma Chau are two out of 219 craft villages which have been approved by the local authorities for developing tourism, which will be initiated in 2014.

Mr. Ho Tan Cuong, Deputy Director of the Department of Culture, Sports and Tourism of Quang Nam province, said that the development of tourism will revive craft villages, bring about additional sources of income for the people.

Some craft villages such as Thanh Ha pottery village, Tra Que vegetable village in Hoi An city are very famous tourist attraction. However, according to Cuong, these villages can develop tourism because they are located inside Hoi An, a tourism city.

Earlier, in 2004, Quang Nam province spent VND16 billion ($1 million) for tourism development in three craft villages, including Ma Chau and Phuoc Kieu but currently, the two villages are dying because their products are unmarketable while local people are not eager in tourism.

Cuong said the local government would encourage the two villages to promote tourism through the building of showrooms and new production facilities to serve tourists and adding the two villages into the tour to My Son sanctuary and other tourist destinations in the province.

From June 2013 to June 2013, the Association of Vietnam Craft Villages will implement a program to promote trade with the message "Enterprises and craft villages combine for development" and "Vietnam craft villages’ high-quality products - global integration."

The association’s chairman - Mr. Luu Duy Dan – expected that with the active support of the state and the specific direction of the association’s members, craft villages will find the markets.

"The most important thing is still the connection between supply and demand and between businesses to find outlets for craft products," Dan said.