Under the National Assembly’s Resolution 88, MOET would be in charge of compiling one set of textbooks. The textbooks would be reviewed and assessed together with the textbooks to be compiled by other authors to determine whether they could be used. 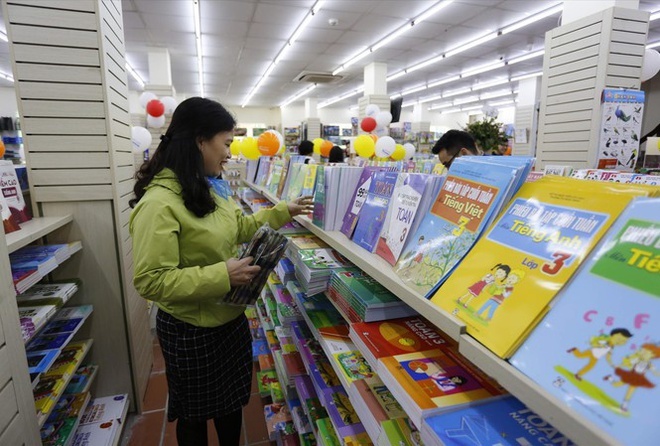 However, MOET Minister Phung Xuan Nha has asked for the National Assembly’s permission to discontinue compiling the textbooks. He said MOET organized bids to select experts to compile textbooks, but it could not find enough authors for many reasons.

The MOET decision to withdraw from the textbook compilation project has been applauded.

‘Socialization’ is a term used by Vietnamese government officials about implementation of projects, plans or strategies with resources from the ‘whole society’ or ‘all people’.

The projects developed under the ‘socialization’ mode are understood as those developed by different economic sectors in society, not funded by the State.

Nhuong said the policy on socializing the compilation of textbooks has succeeded with five sets of textbooks for first graders, examined and approved for publishing.

“The socialization has attracted the intelligence of educators. Leading scientists and experienced teachers have compiled the textbooks, ” Nhuong said.

“All leading experts gathered their strength on compiling their textbooks. Who will compile textbooks for MOET then?” he asked.

Ho Thi Minh, a National Assembly Deputy from Quang Trì, also thinks that the socialization policy has brought initial achievements. The healthy competition among organizations and individuals in compiling textbooks will lead to improvement in textbook quality.

The National Assembly in Resolution 88 assigned MOET to compile a set of textbooks because it feared that no one would come forward to compile textbooks under the socialization program or that textbooks would not have high quality.

However, as five sets of textbooks are available, MOET does not need to compile textbooks.

Duong Trung Quoc, a National Assembly Deputy from Dong Nai, said the state needs to set up a reasonable policy to encourage authors and publishing houses to produce textbooks with high quality and low costs.

Prof Ha Huy Khoai, a famous mathematician and educator, believes that students should learn with e-textbooks because of the open access to many people.