VietNamNet Bridge – Teachers are not forcing failing students to repeat classes, because if they do, they will not fulfill the tasks of the education-universalization program.

VietNamNet Bridge – Teachers are not forcing failing students to repeat classes, because if they do, they will not fulfill the tasks of the education-universalization program. 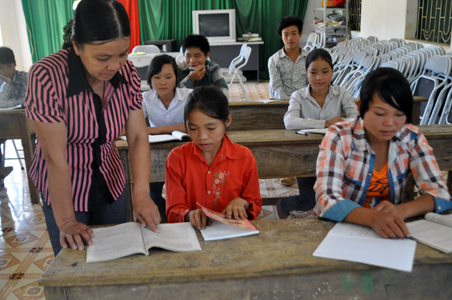 In principle, weak students who have a low GPA (grade point average) below 5.0 will not be allowed to move to the next grade.

However, in reality, no student is considered “weak” and no one has to repeat classes, because their teachers want them to move to next grades.

If they do not move to the next class, the teachers will be punished for not fulfilling their tasks in the education universalization program.

As a result, some students are being forwarded to the next class without sufficient knowledge.

Nguyen Thi Le, a schoolgirl born in 2005, was a third grader at Thanh Van Primary School in Nghe An province in 2014. However, her knowledge is worse than that of a first grader.

One day, Le’s father one day asked her to read words on TV and surprisingly realized that she couldn’t do it.

This has been happening not only in mountainous districts, but also in Hanoi as well.

Many high school students, for example, don’t even know when the August Revolution took place. A 12th grader was able to give one right answer on a multiple choice test.

He knew that September 2 was Vietnamese National Day but did not know why it is celebrated.

The success of the education universalization program has been measured by the percentages of good and weak students, as well as drop-outs.

Teachers are expected to keep a close watch over the numbers of students in their classes, and talk to students who want to drop out to persuade them to return to school.

However, in many cases, they fail to do that, because the students’ parents decide that their children need to help them with field work. Therefore, teachers have to “play tricks” to bring the dropouts back to school.

The students are put in evening classes, called “universalized classes”. Schools have to spend money to run the classes, including paying VND25,000-30,000 to teachers for each class session.

The universalized classes are very “flexible”. Students go to class when they feel like it. However, even if they don’t attend regularly, they will still finish the academic year and will be given certificates on fulfilling the compulsory education program.