The elections have gone as planned in all cities and provinces so far, thanks to well-organised and convenient setup, member of the National Election Council and Vice Chairman of the National Assembly Nguyen Khac Dinh told reporters on May 23. 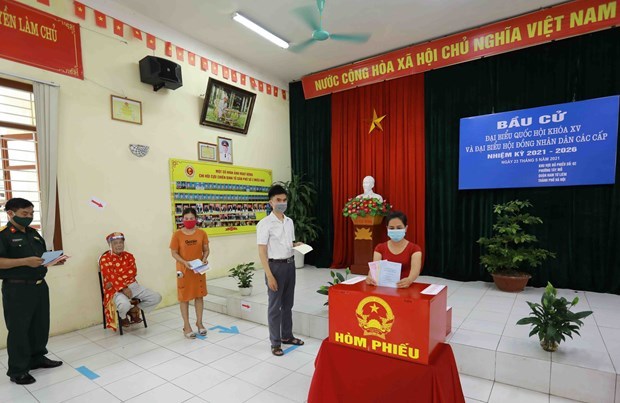 There have been no reports on election-related problems by localities so far, he said.

Voting has completed in several electoral units with the voter turnout rate reaching 100 percent, Dinh noted, adding that an electoral unit of the public security force in the Mekong Delta province of Tra Vinh was the first to complete the voting in the country, at 6:50am, with a 100 percent turn-out rate.

The NA official further said that the election process in quarantined and lockdown areas is also going on smoothly. He explained that the National Election Council has issued ten documents providing detailed guidelines for the organization of elections inside quarantined sites and locked down areas.

Voting began at 7am on May 23 across around 80,000 polling stations nationwide in the elections of deputies to the 15th National Assembly and People’s Council at all levels in the 2021-2026 tenure.

More than 69 million voters across the country are expected to turn out to elect 500 deputies to the 15th NA among 866 candidates.

Voting is scheduled to end at 7pm the same day.

President Nguyen Xuan Phuc and his wife joined others voters in Cu Chi town of Cu Chi district, HCM City, in casting ballots on May 23 morning to select deputies to the 15th National Assembly (NA) and all-level People’s Councils for 2021-2026.