VietNamNet Bridge - Thanks to its low labor costs, favorable geographic location and its market of nearly 90 million people, Vietnam has received billions of US dollars of investment from giants like Samsung, Intel and LG.

VietNamNet Bridge - Thanks to its low labor costs, favorable geographic location and its market of nearly 90 million people, Vietnam has received billions of US dollars of investment from giants like Samsung, Intel and LG. 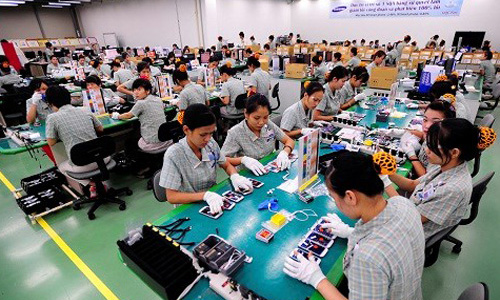 A decade ago, Vietnam was only a minor link in the global electronic supply chain. But last year, the country’s gross revenue from electronic exports exploded to US$38 billion, according to statistics from the International Trade Centre (ITC).

Although the figure could not compare to China’s revenue of US$560 billion, it helped Vietnam rank among the top 12 electronic exporters in the world.

In fact, many electronic manufacturers have shifted their investment from China to Vietnam due to less favourable conditions in China, such as aging population and rising labour costs.

Although China is predicted to continue being the world’s factory in the future, it is no longer the top venue for lower-cost manufacturing and assembling industry. This trend will benefit many Southeast Asian countries, including Vietnam, Indonesia, Thailand and the Philippines, which have an abundant labor force and low labor costs.

This has resulted in many large electronic businesses shifting their investment trend towards emerging and promising markets, particularly Vietnam, which is said to have achieved the highest electronic export growth in the world.

According to Technomy, Vietnam has a more convenient geographical position than other Southeast Asian nations. They also cite as pluses Vietnam’s proximity to China which allows them to better utilize pre-existing supply chains and the fact that Vietnam faces fewer natural disasters.

“Many electronics manufacturers seek more than low-cost labour when they choose a location for production. They also look for countries that can emerge as large domestic markets. Vietnam seems to have all the right ingredients for that to happen,” said Glenn Maguire, chief economist for the Asia-Pacific region at ANZ Bank.

Low labor costs, however, remain the primary attraction for many electronics manufacturers. Those in Vietnam command some of the lowest wages in the region. Only people in Cambodia, Laos, and Myanmar earn less, but those countries lack many of Vietnam’s other advantages.

Booming electronics production will help lift Vietnam’s economy, but questions remain about how evenly benefits will be spread.

Right now, most factories focus on relatively low-value production and assembly work. Although setting up and running those factories require skilled managers, technicians, and engineers, most workers will be stuck on an assembly line screwing things together for the foreseeable future.

Long-term growth depends on whether Vietnam can ultimately move up the productivity value chain and create more skilled jobs.

The influx of foreign electronics manufacturers gives the country a unique opportunity to absorb foreign technology and expertise. It also provides capital to fund much-needed improvements in infrastructure and education.

If Vietnam can continue to develop its tech talent at home, a new generation of skilled workers will allow the country to export progressively higher-value products.

It will also expand the base of high-income professionals, fueling greater demand at home for those same goods. If that doesn’t happen, however, the country will probably attract new investments only until cheaper locations emerge somewhere else.