With billions of US dollars worth of high-quality investment committed, Vietnam is set to elevate itself to value chains, becoming a key manufacturing hub in the region. 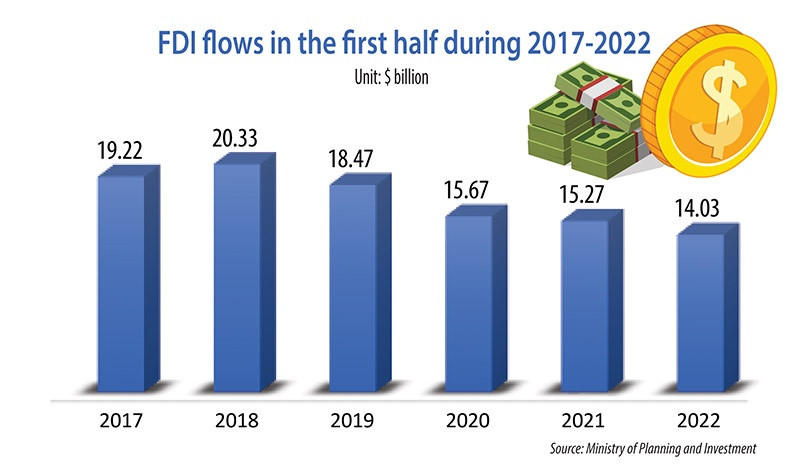 The Ministry of Planning and Investment (MPI) reported last week by the Vietnam Electronic Industries Association (VEIA) that Apple has moved 11 factories from Chinese businesses in the supply chain to Vietnam, while other assemblers like Foxconn, Luxshare, Pegatron, and Wistron are ramping up production capacity in Vietnam.

Do Thi Thuy Huong, general secretary of the VEIA, said that the electronic components manufacturing industry of Vietnam has its own advantages for those looking to relocate supply chains out of China to neighbouring countries.

“A number of high-tech groups have been cultivating their projects in the northern provinces of Bac Ninh and Bac Giang, and they will also do the same in some other potential localities,” Huong said.

Last week Sandeep Mehta, president of India’s Adani Ports & SEZ, announced on behalf of Adani Group that it would pour $10 billion into Vietnam. It is part of a $100 billion package that Adani Group would like to invest overseas.

Mehta reaffirmed that Adani pledged to develop Lien Chieu Port in the central city of Danang, along with logistics areas and industrial zones in the city, enabling them to become an economic gateway for Vietnam’s central region.

“We also require the support of the Vietnamese government to develop infrastructure and deploy the projects,” said Mehta.

At the same time, Adani Group has committed to spending $7.5 billion on charity work. “We would like to contribute to social responsibility in Vietnam, in accordance with the commitment of Adani’s president,” he added.

Meanwhile, Samsung is continuing its expansion in Vietnam (see Page 15). It is still building Southeast Asia’s largest research and development centre in Hanoi, while planning to expand factories in the northern provinces of Bac Ninh and Thai Nguyen. In early 2022, the southern province of Dong Nai granted an investment certificate for two projects worth $100 million to Samsung supplier Hansol Electronics Vietnam.

Huong of the VEIA said that the electronics and IT industries of China are developing well. In global supply chains, they are at a higher value position than assembly only. “Vietnam is quite similar to China in terms of electronic manufacturing, labour, geographic location, infrastructure, and logistics. So it is easy for Vietnam to receive the relocation investment and technologies moving from China,” said Huong.

According to the latest report by HSBC, Vietnam continues to be a magnet for foreign direct investment (FDI) in ASEAN as it is transforming into a production base for tech giants. Vietnam and Indonesia are the two markets receiving the most FDI and, while Vietnam is transforming itself into a technology manufacturing hub, Indonesia is focusing on the electric vehicle supply chain.

“Reforms in the legal framework for FDI in every ASEAN country in recent years will attract significant investment capital,” HSBC said. “Thinking of FDI-driven economic success stories, Vietnam naturally stands out. The country has turned itself into a rising star in global supply chains, gaining a substantial global market share in many sectors including textiles, footwear, and consumer electronics. New FDI has been flowing into the country since the 2010s, with the lion’s share concentrated in the manufacturing sector, which consistently accounts for 4-6 per cent of GDP.”

Electronics exports reached a record high of $100 billion in 2021, accounting for over 30 per cent of Vietnam’s total exports – just 20 years ago, the share was only 5 per cent.

According to another report by the Asia-based philanthropic organisation Hinrich Foundation published last month, Vietnam’s increasing openness has seen a higher increase in FDI stock as a percentage of GDP. Compared to its regional peers, the country has changed from one of the most restricted to FDI to one of the most open.

“One useful change was the revision of the Law on Investment, which restricted the ability of central and subnational governments to issue regulations on investment. This change removed uncertainty and overlapping or contradictory legislation,” the report noted.

According to the 2022 half-year Vietnam FDI report from the European Chamber of Commerce in Vietnam, Vietnam has been one of the most promising and active FDI markets in the Southeast Asian region. Since 2015, the country has ranked third in ASEAN for inbound FDI, behind only Singapore and Indonesia.

The country is also among the top 20 countries attracting the most FDI, according to the World Investment Report 2021 by the UN Conference on Trade and Development. With FDI accounting for about 70 per cent of Vietnam’s exports, FDI has also been a significant driver of economic growth.

The Ministry of Planning and Investment last week reported that as of June 20, the total of newly-registered, adjusted, and contributed capital in shares reached $14.03 billion, about 91.1 per cent over the same period in 2021. Disbursed capital for foreign-invested projects in the first six months of 2022 also rose 8.9 per cent on-year.