Believing that wildlife is the origin of many infectious diseases, ministries and non-profit organizations have repeatedly called on provincial people’s committees to take prompt action to remove wildlife black markets in their localities. 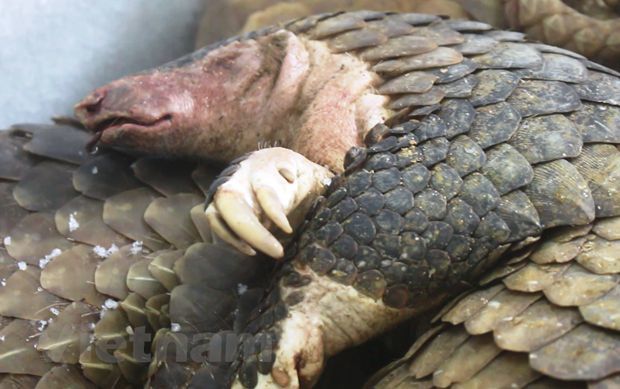 Studies found that 70 percent of animal-to-human infectious diseases are sourced from wildlife and removing black wildlife market is a solution to fight Covid-19 epidemic.

Trinh Le Nguyen, director of PanNature, a Vietnamese not-for-profit organization dedicated to protecting and conserving diversity of life, cited a report released in 2019 as showing that at least 105.72 tons of elephant ivory (15,779 individuals), 1.69 tons of rhino horns (610 individuals), bone and skin of at least 228 tigers, and bodies and scales of at least 65,510 pangolins have been found in wildlife trafficking cases in Vietnam or related to Vietnam in the last 15 years.

Meanwhile, the report of the Wildlife Conservation Society – Vietnam Program and the Department of Crime Statistics and Information Technology confirmed that during 5 years (January 2013 - December 2017), 1,504 cases of violations of the laws on wildlife protection were discovered, prevented and handled; 41,328 kilograms of wildlife and products were seized; and 1,461 violators and 432 defendants were brought to trial.

In the context of SARS-CoV-2 outbreak intensification, Vietnamese agencies have released notices and directives requesting local authorities to tighten their control over wildlife trading and consumption activities to prevent epidemics.

The recognition of the threats from wildlife trade, especially the possibility of transmitting disease from wildlife to humans, has disillusioned society, the community and individuals who have been using products derived from wildlife.

This is also an opportunity for countries to review, amend and strictly enforce laws on wildlife conservation and prevent illegal wildlife trade.

Nguyen said there are still many wildlife trade markets throughout the country, large and small, including ones trading endangered, precious and rare animals. Restaurants that serve dishes made of wild animals are still running.

Investigations by local newspapers and some nature conservation organizations found that many wildlife raising farms have been used as screens to legalize illegally poached animals and put them up for trade.

The Thanh Hoa Market in Long An province, a big ‘hot spot’ in illegal wildlife trade, has existed for a long time despite the complaints by local people, and warnings by social organizations and press agencies.

“Even with direct supervision on the spot by journalists, they still do not follow their law enforcement duties,” he said.