Bringing together Quynh Dong, Bao Vuong, Nguyen Phuong Kieu Anh, and Phan Anh, ‘Remnants’ looks at the intersecting points of portraiture and memory. It explores what contemporary portraiture might look like in the 21st Century, and how this pictorial category has shifted away from simple mimesis into a longing to recompose the stories of others, and by extension the self.

Above all other artforms, portraiture has a unique connection to the concept of likeness, explaining our tendency to observe it as a substitute for evidence and fact of a person, society or era frozen in time.

But no matter the accuracy, portraiture has always been mediated by the subjective impulse of the artist and by its context of production.

This feels particularly relevant in our time where a wide array of determinants have completely changed the face of this genre, pushing artists to fully embrace the fictitious and personal nature of their work.

Erwin Panofsky described the task of the portraitist as bringing out the unique qualities of its subject, how it differed and stood apart, while also revealing its common traits with the rest of humanity.

Similarly, the four artists have created homages to their families and background as a starting point, ricocheting into wider investigations of transferred memories, growing up in a postwar world, exploring diasporic and mixed identities, or parental mythologies to name a few.

“Về nhà ăn cơm” is a common Vietnamese phrase to remind people to come back home and share a meal with their family. It comprises of:

As a phrase, it means:
1. A reason to decline an unwanted invitation
2. An invitation for someone that you would like to cook for them
3. An endearing way for your family members/loved ones to show that they care about you (and your well-being)

In Vietnamese culture, having a meal together is a daily family activity. A home meal/dining table thus serves as a “touching point” where family members come together, interact with one another, share thoughts or simply have a conversation. A home meal, therefore, is remembered through both connecting moments and conflicts between different generations. Supported in the framework of Hanoi Rethink project, Makers Market – Arts and Crafts Fair will be a space where young craft makers, designers, and printmakers from all over the country gather, introduce and promote their products in an immensely cultural and artistic space.
This is certainly not only a great opportunity for the young community in Hanoi to access a wude range of creative products from across the country, but also a time for creative youth to get together to network for potential new creations and collaborations in the future.

The event aims to boost cultural exchange and step up cooperation in trade, investment, education, information technology, tourism and healthcare between the two countries. 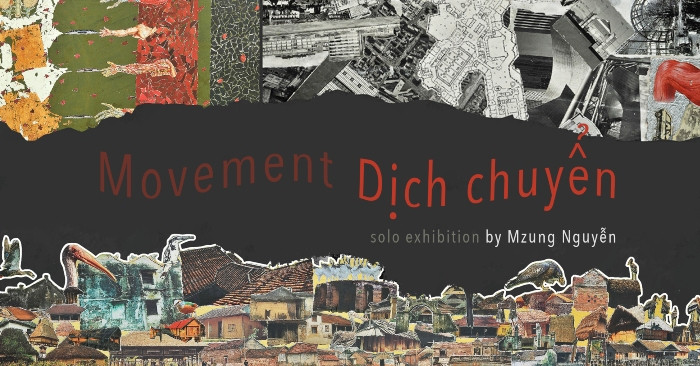 Movement by Mzung Nguyen is a solo exhibition, a visual essay reflecting the transition of urban life through a mixed discipline of collage-art practices. In terms of materials, this project collects and reuses hundreds of old magazines, which have been published during the past decade.

Mzung Nguyen finds motivation in tracking the shifts in time and space, the replacement of old and new values, the cultural disparity between tradition and modernity, and the contrasts between human life and the natural world that are printed out in these old publications.

Mzung Nguyễn was born in 1982, in central Vietnam. She graduated from journalism studies in 2006 and started her career as a writer. After engaging with several different forms of writing, Mzung Nguyen focused on writing film scripts and was soon persuaded to embark on a professional career in making films. Her works have been released internationally, and Mzung Nguyen has received significant rewards for exploring documentary, short, video-art, and experimental films. After ten years of concentrating on the film sector, Mzung Nguyen started looking for new dimensions of creativity with oil painting and collage. Just as her films did previously, Mzung Nguyen still finds artistic novelty in reflecting a contemporary world, however, through the painting discipline, she is able to capture the stillness missed in her moving-picture works.

A Saga of Unrealised Projects Entitled A Saga of Unrealised Projects, the display will unveil design models of 24 building projects developed by Nguyen Ha and her associates at Arb Architects.

Paul Valéry, had famously declared: “That which has always been accepted by everyone, everywhere, is almost certainly to be false”.

Then, what about the things not accepted? Is it probable that there has always been a kind of truth, a particular significance existing in the unaccepted, rejected things? If so, should we (instead of putting them away) take a step back and give them another look?

Such a sudden burst of thoughts got us disoriented, in the persistent hot days of this prolonged summer, and finally prompted us to melt all away in a pop-up show of architecture at our exhibition space, tilted ‘A saga of unrealised projects’

In the Midst of Mirages “In the midst of mirages” is the title of Vin Gallery’s next show by Duy Phương. The show will present Duy Phương’s long-term photography projects, “Volatile States” (2010 – 2017) and “Mirages” (2017 – 2022). Duy Phương beautifully captures the emotions and changes in the landscape of Vietnam and the society in its natural state.

Sculpture is a medium that has largely been overshadowed in Vietnamese contemporary art by painting. The modern form of sculpture that might be said to commence with Rodin has also been largely skipped over by the most recent generation of Vietnamese visual artists who tend to conceive of sculpture in the more contemporary terms of installation and conceptualism rather than in the classical sense.

Perhaps uniquely for a young sculptor, Saigon-based Pham Dinh Tien has emerged as one of the most compelling young Vietnamese visual artists creating in the country today. Working primarily in bronze, Tien has rather quietly but no less impressively been producing strong works of sculpture for more than a decade.

Over the last two years, Tien has been conceiving and making the works of the Wandering Age collection. Bringing into physical form the fourteen sculptures of the collection is an achievement that has necessitated the often conflicting virtues of great creativity and great discipline.

The investments of both artistic and financial resources to create Tien’s latest collection of works are substantial and provide clear evidence of the seriousness and ambition of his purpose. Tien has a preternatural ability to bend the most challenging and mercurial of materials with such dexterity that he is able to clearly express the images that form in his mind as he travels the streets of Saigon or even, he says, those which appear in his dreams. Istanbul, with one foot in Europe and the other in Asia, stands at the intersection of a multitude of cultures, religions and languages. At once modern and traditional, it’s a city that has fascinated and intrigued visitors for centuries.

Istanbul was historically in-strumental in the advancement of Christianity during Roman and Byzantine times, be-fore the Ottomans conquered it in 1453 CE and transformed it into an Islamic strong-hold and the seat of the Ottoman Caliphate. In 2015, Istanbul was named a European Capital of Culture, making the city one of the world’s most popular tourist destination.

Ara Güler’s works of Istanbul similarly demonstrate his deep love of the city and its in-habitants. They dont really document the modernization from 1950 – 1960, they stop more on what is disappearing in the city and in Turkish society. During this era, Istan-bul underwent great structural change, as new public squares, boulevards, and ave-nues were constructed, sometimes at the expense of historical buildings and many artworks. In the images of the 50s and 60s, we can feel the deep nostalgia that already animated Ara Güler at the time. ‘Dept. of Speculation’ is a non-hierarchical agency that materialises and thrives only in the realm of thoughts and possibilities. Its existence was unknown to many including its members — the speculators, until recently. Just as the speculators attempt to make sense of what is happening in their lives, the department begins to take form. The department functions on a conjectural, pseudo-scientific premise: ideas about time and space as we know them are subject to the speculators’ very own empirical and personal reconfigurations.

Nguyen Art Foundation (NAF) proudly invites you to the opening of ‘Illuminated Curiosities’, a group exhibition with 26 artists featuring 46 artworks from within and outside NAF’s Collection.

Curated by art researcher Ace Le, with the curatorial assistance from Duong Manh Hung and Tam Nguyen, the exhibition will take place simultaneously across the campuses of EMASI Nam Long and EMASI Van Phuc, over the course of six months from May to December of 2022. ‘Illuminated Curiosities’ is a collaborative effort between NAF and Lan Tinh Foundation.

This exhibition aims to highlight the unique intersection between art and science through a broad array of experimentation in visual, material, media and concept. The title of the exhibition serves as a response to, a critique on, and an expansion of, the age-old concept of “cabinet of curiosities”, borrowing the perspectives of today’s artist-scientists, as they experiment with limits in terms of thematics, materials, and medium to pursue personal and societal curiosities. Featuring more than 30 exhibits, documents and images featuring tigers throughout over 2,000 years of the country's art history, showing that the image of tigers was widely portrayed in Vietnam’s ancient pottery, carving and folk paintings, among others.