A day for filial piety: the Vu Lan Festival

One of Vietnamese important traditions of the year is just around the corner, providing people a chance to send on their prayers and positive thoughts to hope for continued good times. 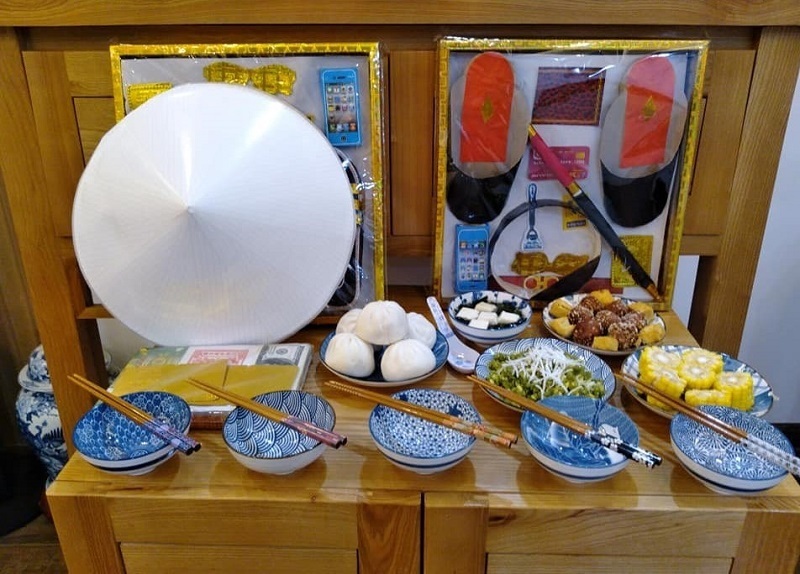 The offerings for ‘Xa toi vong nhan’ or Vu Lan Festival: set of votive paper. with a conical hat for mother, the other set with umbrella for father.

The most important Buddhist practice falls on the full moon of the 7th month of the lunar year, which falls on August 22 this year. During the day, Vietnamese will offer food and drinks to the ancestors and deceased parents as well as showcase the love to their alive ones.

“Remember to buy some votive paper objects at the market,” I heard my in-laws say to each other. Having lived under the same roof for nearly two decades, I’ve heard similar conversations when ‘Xa toi vong nhan’ (the releasing day for imprisoned spirits) or Vu Lan Festival (Day to memorize about deceased parents) approaches.

Vu Lan (Ullambana) Festival, also known as the Amnesty of Unquiet Spirits, is held during the seventh lunar month as this is also considered to be the month of the spirits. The origin of the festival is explained by the legend of Maudgalyayana, known as Muc Kien Lien in Vietnam, one of the ten great students of Buddha.

According to the Sutra, Muc Kien Lien, thanks to his divine eye, saw that his mother had been reborn as a hungry spirit because of evil acts in her previous life. He wanted to save her but as an Arhat Maudgalyayana he could not do it by himself. The Buddha told him that only the combined effort of all Buddhist monks could soothe the sufferings of the tormented.

He ordered Muc Kien Lien to organize an assembly of monks to make offerings for his deceased mother.

From this assembly, many Buddhist countries developed their own custom of offering food, clothing, and other items to hungry spirits in the seventh lunar month, when the realms of Heaven, Hell, and the living are open.

My mother-in-law returned home from the market with plastic bags full of votive paper items: clothes, an umbrella, and Chinese- style shoes for my husband’s grandfather, and a conical hat, sabot, and a scarf for her grandmother. Like most Vietnamese housewives, she usually burns these votive papers as a way to present those ‘gifts’ to the souls of the dead on a variety of occasions.

According to historian Le Van Lan, it is a spiritual custom that originated from the idea that ‘death does not mean the end’ and ‘everything is the same in the living world and the other world’.

“In doing so, it connects modern-day folk to their past. People offer votive paper along with other offerings to show Vietnamese people love and respect to deceased parents and forebears,” he said.

According to tradition, on the day of the ‘Xa toi vong nhan’ - as the northern Vietnamese call it - people prepare food and drink to offer their ancestors. It is also a day of forgiveness when people pray for souls walking the earth hungry and thirsty.

Offerings for these wandering souls include easily prepared dishes such as boiled sweet potatoes, rice, rice soup, and snacks made from maize powder. Prayers for the dead are offered at the front door and in nearby temples (due to the Covid-19 pandemic, this may be prohibited in the areas where social distancing order is in place). After the ceremony, food and drink are given to the children.

Above all, the ceremony is a time for offspring to fulfill their filial duty and repay their parents’ love and care.

“The principle of filial piety is still important today. Burning votive paper and incense may provide individuals a moment to reflect on important days of the year on the nice memories they’ve had and send on their prayers and positive thoughts to hope for continued good times,” monk Thich Thanh Tinh, the abbot of Dai Quan Pagoda in Hung Yen Province told The Hanoi Times.

According to him, this Buddha festival is seen as an opportunity to teach the younger generation to respect their deceased ancestors, especially their mothers.

“Do you think the dead receive what we offer them?” I asked my father-in-law after the worshiping ceremony, “Spirits are unreal, so why offer them real food?”

For most people, there is nothing to question about wandering souls and spirits. “It must mean something, otherwise it would not have been handed down to us since the distant past. I never wonder whether there are spirits or whether these souls can eat. It’s not a matter of existence or non-existence. It is enough for me to know that I am Vietnamese,” he replied.

Perhaps that’s a hidden purpose of burning papers and incense in Vietnam - a chance to slow down for a moment and remember time spent with loved ones, to take a moment to be grateful for the blessings people have now and to renew optimism for what the future may hold.

And this seemed to be a clear explanation of why the festival has become so popular these days.

Online cultural activities during the Buddhist Vu Lan Festival this week are being held as the number of COVID-19 cases continues to increase in HCM City.