An untold story behind the bust of Uncle Ho

The exhibition, entitled Hồ Chí Minh – Sketches of Portrait¸ is part of the celebration of the 130th anniversary of the President’s birthday. Running till October, the event showcases over 200 photos, objects and posters associated with Uncle Ho, many of which have never been shown to public before, including the bust.

The statuette, a valuable keepsake of Vietnamese soldiers imprisoned in Con Dao Prison in the 1940s, was presented to Ho Chi Minh Museum from Deputy Prime Minister, Minister of Foreign Affairs Pham Binh Minh on February 25.

Hidden behind the bust is an emotional story about the Vietnamese patriots’ beliefs and affection in Con Dao Prison for the hero of national liberation and a great man of culture.

His duties involved holding keys, guarding, patrolling and managing prisoners at some camps in the prison.

While working there, he realised some of the prisoners’ unusual behaviours. Checking a cell, he discovered that the Vietnamese soldiers seemed to be trying to hide an object which he suspected to be a weapon.

He then requested a search and obtained a bust of President Ho Chi Minh – the leader that they admired, respected and worshipped.

The statuette was secretly brought into Con Dao Island and miraculously survived through the strict control of the contemporary French government.

Witnessing the brave spirit of the soldiers, Miniconi understood their affection and loyalty to President Ho Chi Minh and then decided to keep the bust as one of his own memories of working on Con Dao Island.

After finishing his tenure in Vietnam in 1952, he returned to live and work on Corsica.

The bust of Uncle Ho was then preserved and respected by his family. After he passed away, it was kept by Miniconi’s son Paul Miniconi who used to live in his father’s workplace on Con Dao Island.

On December 1, 2019, Miniconi and the French historian Frank Senateur presented the statuette to the Vietnamese Ambassador in France, Nguyen Thiep, and then it was transferred and preserved at Ho Chi Minh Museum.

Interestingly, Ambassador Thiep, who received the statuette, was the son of a former prisoner who was detained at Con Dao prison during Miniconi's tenure.

To Paul Miniconi, the return of the bust to the government and people of Vietnam is to fulfill the sacred will of his father before his death.

“This is a precious statuette with many historical values, treasured and preserved by Miniconi's family for many years,” said Director of Ho Chi Minh Museum Vu Manh Ha.

“With all responsibilities and respect for the Party and Uncle Ho, the Ho Chi Minh Museum will preserve and promote the value of the object by introduce it to the public on the occasion of the 130th anniversary of the President’s birthday,” he added.

Con Dao Prison Relic Site is a special historical monument of Vietnam, ranked in the list of 10 most cruel prisons in the world.

For more than 100 years (1862-1975), nearly 20,000 revolutionary soldiers and many generations of Vietnamese patriots were imprisoned, tortured and sacrificed here.

The French colonialists, then the American, aimed to turn the prison into a "hell on earth" to erode the revolutionary will and torture Vietnamese patriots.

But it is also where many Vietnamese soldiers got determined with their consistent struggle and maintained their will for revolution.

In prison, the image of Uncle Ho used to be a great source of encouragement of the revolutionary soldiers. To have a picture of the president on secretly saluting the flag or admitting new members to the Party, Con Dao prisoners used to draw and embroidered his portrait following their imagination. They managed to secretly hide both the portrait and bust under the strict control of the warders.

“It is also the first statue of Uncle Ho in Vietnam after the nation gained independence in 1945-1950. It is a valuable keepsake of Con Dao prisoners, manifesting their affection and respect for both the Party and President Ho Chi Minh,” said Pham Thi Thanh Mai, the deputy director of Ho Chi Minh Museum.

She also added that the museum would conduct research and fulfill the information about the object in the future to serve the public.  VNS

An exhibition which recalls heroic stories about the willpower and resilience of Vietnamese revolutionary prisoners during the country’s liberation experience is being held in Hanoi. 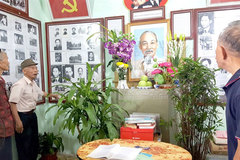 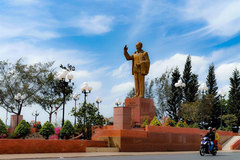