Photos of the architecture of traditional Vietnamese villages are on display at an exhibition in Hanoi hosted by the Monument Conservation Institute. 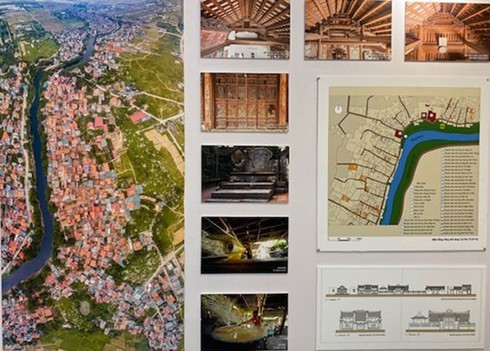 Traditional Vietnamese villages are structures of organization and social governance. They have unique cultural value systems such as temples, pagodas, old banyan trees, and wells, and preserve a typical Vietnamese community living space.

The exhibition highlights detailed drawings and survey data on the architecture of these old villages, according to architect Hoang Dao Cuong, Director of the Monument Conservation Institute.

“Phuoc Tich and Cu Da villages still maintain 26 ancient houses, while An Truyen village has 7 houses, and Hanh Thien village has 10 ancient houses plus religious buildings, village roads and living space, all remain intact. These are vivid vestiges of ancient villages in northern and central Vietnam, encouraging us to promote our traditional values in modern life," said Cuong.

These villages are close to rivers creating a friendly environment between people and nature.

“The exhibition provides the audience with a basic understanding of Vietnam’s traditional villages as well as their tangible and intangible heritages," Associate Professor Dang Van Bai, Vice Chairman of the Vietnam Cultural Heritage Association, told VOV.

"These old villages are valuable in many aspects but they are threatened by economic activities and the whirlwind of urbanization. This exhibition reminds us of the importance of preserving and promoting our traditional villages,” Bai added.

“All works on display have portrayed the tranquil rural life of Vietnam, helping us better understand our traditions and encouraging us to protect such values,” said Tong Van Tin, a visitor.

The villages share many architectural similarities but each has its unique features, according to Dr. Tran Hau Yen The of Vietnam’s Fine Arts University.

“I’ve been to most of the ancient villages featured in this exhibition. We often notice their typical architecture like temples or pagodas. In this exhibition, we are provided with the history of those villages, their construction and special architectural designs,” Dr. The noted.

The six villages on display have been introduced in the first volume of a book entitled “Architecture of Vietnamese Traditional Village”, which was released earlier this month. The exhibition runs until September 15 at the institute in Hanoi’s Thanh Xuan district.

Currently, there are 3,500 national relics in Vietnam, including only four old villages, namely Phuoc Tich in Thua Thien-Hue; Dong Hoa Hiep in the southern province Tien Giang; Duong Lam in Hanoi; and Loc Yen in the central province of Quang Nam.