“Blast-Off Party”, the first show of the Saigon Psych Fest 2020, will take place at Soma Saigon in District 2 on February 13, starting at 8 p.m. The show will feature Low Hums from the U.S., Buddha Beat from Malaysia, and Skeleton Goode, The Kanonos, and Tran Toan K300 - Funk Rock from Vietnam.

The final show “Saturday Spectacular” at the Arcan in Binh Thanh District will last 12 hours, from 5 p.m. on February 15 until 4 a.m. the following day, featuring performances by all above-mentioned bands. Other local bands including Saigon Soul Revival, Jung Buffalo, Magic Pinions, and Green Means Go will also join the final show.

The Saigon Psych Fest 2020 is part of the Locally Trapped Wildlife music series, which has presented over 50 events in Vietnam, Cambodia, Thailand, and Malaysia featuring both local and international artists since May 2017. SGT 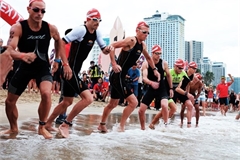