HCM City’s Tran Huu Trang Cai luong Theatre, one of the region’s leading traditional art troupes, will open an exhibit hall featuring information and images about cai luong (reformed opera) to celebrate the 75th anniversary of the August Revolution (August 19, 1945) and National Day (September 2, 1945). The hall will also honour veteran artists who used their art to serve the revolutionary movement in South Vietnam in the 1940s and 50s. 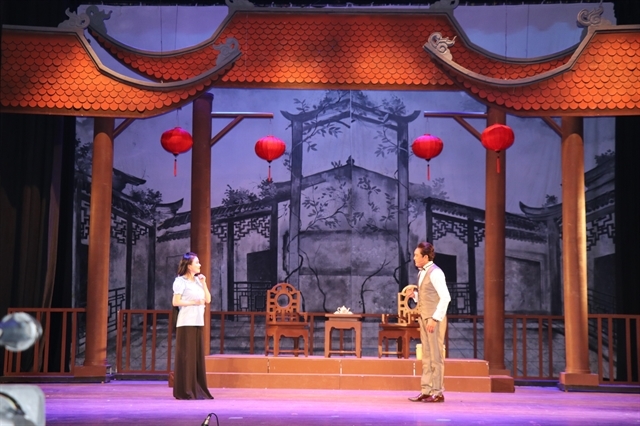 A new theatre hall will display photos, books, documents and videos featuring the history and development of cai luong, a traditional genre of southern theatre which began in the early 1920s in the Mekong River Delta region.

“Our hall aims to honour cai luong and its veteran artists who used their art to encourage southern people and soldiers during the country’s two wars of resistance and national construction,” said Phan Quoc Kiet, director of Tran Huu Trang Cai luong Theatre.

“Through the images and objects, we hope visitors, particularly young people, learn more about the nation’s heroic history and the great contributions that southern artists made to the country and people,” he added.

Cai luong Nam Bo Troupe was formed from three cai luong troupes in the region. The troupe sent its artists to perform at the National Music and Theatre Festival in Hanoi in 1955 after the 1954 Geneva Agreement on Indochina was signed.

The troupe played a very important role in the theatre’s developments in the South. Its artists used their art to encourage southern people, intellectuals, poor farmers, and workers to join the national revolutionary movement. Their plays, such as Lua Chay Len Roi (The Fire) and Mau Tham Dong Noc Nan (Blood in the Noc Nan Field), portrayed patriotism and Vietnamese culture and characters.

“We travelled around the region to offer shows featuring the activities of the Việt Minh (Vietnam League for Independence) Committee of the South in August 1945,” said Thiện, who worked for the troupe from 1953 to 1956.

Thien and his colleagues, such as Meritorious Artist Ca Le Hong and Tran Hoang Khanh, still work to keep their art alive and show it to younger artists. They have worked with Tran Huu Trang Cai luong Theatre to offer training to young artists.

The exhibit hall will display and honour Tran Huu Trang and Nguyen Phuong Danh, both revolutionaries and recognised as the foremost cai luong artists.

Playwright Trang was born in 1906 to a farmer family in Cho Gao District of My Tho Province (now Tien Giang Province). He began his professional career in 1928, working for leading troupes owned by Tran Dac, Nam Phi and Nam Chau, respected veterans of cai luong.

In the 1930s, Trang was at the peak of his artistry and fame, with serious plays such as Lan Và Điệp ( Love Story of Lan and Diep), Tim Hanh Phuc (Seeking Happiness) Doi Co Luu (Lựu’s Life) and To Anh Nguyet (Miss To Anh Nguyet), which highlight Vietnamese women, their challenges and suffering under feudal society.

After the August 1945 Revolution, Trang joined the revolutionary cause and worked in Sai Gon-Cho Lon. He was a member of the National Front for the Liberation of the South. He died in 1966 in battle. His body has never been found.

Trang was the first to feature women as leading characters in cai luong. He created more than 30 plays which all feature Vietnamese patriotism and characteristics. They have been staged many times by different generations at home and abroad.

For his contributions, he was awarded the Ho Chi Minh Prize by the Government in 1996.

“Though Trang has passed away, his art is still alive among Vietnamese audiences, particularly southerners,” said Kiet, director of Tran Huu Trang Cai luong Theatre, a leading theatre named after the artist.

People’s Artist Danh joined the August 19 Revolution in An Giang Province’s My Khanh Commune, following the movement in August 25, 1945 in Sai Gon.

He was one of the first leaders of the Cai luong Nam Bo Troupe. He was chosen to represent southern artists to meet President Ho Chi Minh in Hanoi after the 1954 Geneva Peace Agreement on Indochina.

He directed and performed in many cai luong plays for leading troupes and theatres, such as Kim Phung Cai luong Theatre and Chuong Vang Theatre of Hanoi, Hoa Mai Troupe of Ha Tay Province and Hon Gai Troupe of Quang Ninh. Many of his works won top prizes at national festivals and contests.

Danh was the first who used ballet and Vietnamese dances in cai luong. He was also involved in training artists and released several books on Vietnamese theatre, music and dance.

“Danh is a revolutionary and a talented artist who devoted his life to the country and traditional theatre,” said Thien, one of Danh’s students.