Tu Duc Tomb in Hue imperial city has been digitally recorded on the Google Arts & Culture Platform to be promoted worldwide, making it the first heritage of Vietnam to be added to Google’s collection.

Complex of Hue Monuments to be digitally preserved

Built in 1864, the Tomb of Tu Duc at the Complex of Hue Monuments is the eternal resting place of King Tu Duc (1829-1883). It is a typical example of traditional Hue architecture and one of the most important sites in the ancient capital, which has been recognised by UNESCO as a World Cultural Heritage site.

The digitisation of the tomb was carried out under a project launched in summer 2018 by the Hue Monuments Conservation Centre and two US firms - CyArk and Seagate Technology.

Accordingly, the 3D model of the tomb can be viewed at: https://artsandculture.google.com/exhibit/8AICSDNH8yJsJQ

The tomb is among the 30 latest heritages from 13 countries around the world to be included on the Google Arts & Culture platform and its Open Heritage Gateway, together with the temple of Apollo in Greece, the Thomas Jefferson Memorial in the US, and the Mexico City Metropolitan Cathedral in Mexico, among others.

It allows the public to get open access to the world’s largest 3D cultural heritage datasets. 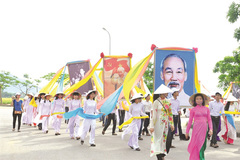 Many arts and cultural activities like exhibitions, performances and a film week will be held nationwide to celebrate the 130th anniversary of President Ho Chi Minh’s birthday, which falls on May 19.