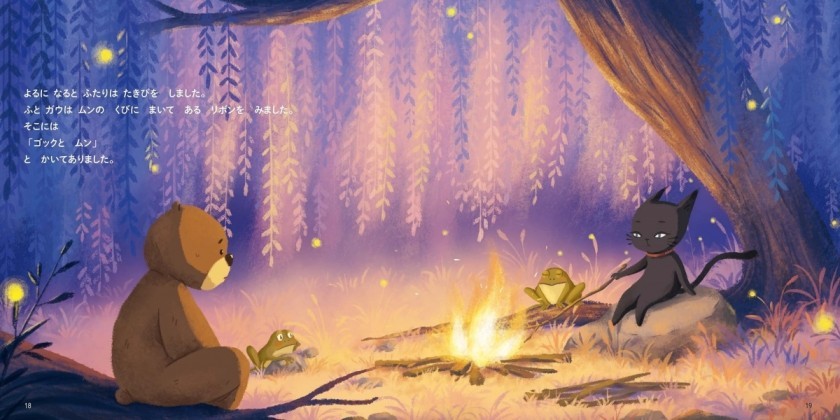 The Vietnamese version of "Friends" was originally published in Vietnam in 2020. Japanese writer Aihara Hiroyuki highlighted the beautiful Vietnamese landscapes and its people, stating that they typically have optimistic, vibrant, and warm personalities.

He went on to express his keen interest in Dom Dom paintings which feature the image of Japanese people through the calm Brown Bear and the Vietnamese people via the image of brave Mun Cat.

Furthermore, he added his hope that children of both countries will enjoy a strong bond with each other, just like the friends in the story.

Immediately after the release of the Japanese edition, the author Hiroyuki went to the Vietnamese Embassy in Japan to present this book to Ambassador Vu Hong Nam.

Upon receiving the gift, Ambassador Nam expressed his joy and hope that this wonderful book will be read by many Japanese children who will be inspired to make friends with other Vietnamese children through the book.

Some of her illustrations have since been published, including "The Straw Prince", "Father's Hand", "Jenny's Adventures in the Gluttony Kingdom", and "This and That Story".

Dom Dom won first prize in the Scholastic Picture Book Award 2019 through the work "The Girl on the roof and the Boy on the beach".

This book is also newly published by Scholastic, a publishing group that has existed for more than 100 years in the United States.

Japanese writer Aihara Hiroyuki is the author of more than 100 books of Ehon and co-monologues that are highly popular in Japan.

Vietnamese publishing houses are promoting new programmes and books this summer to encourage children to read.