VietNamNet Bridge – The first time Ma A Pho, a Mong resident of Lao Cai Province's Sa Pa Township travelled to Ha Noi in 2005, he left feeling ashamed and upset due to the barrage of "curious looks" he received.

VietNamNet Bridge – The first time Ma A Pho, a Mong resident of Lao Cai Province's Sa Pa Township travelled to Ha Noi in 2005, he left feeling ashamed and upset due to the barrage of "curious looks" he received. 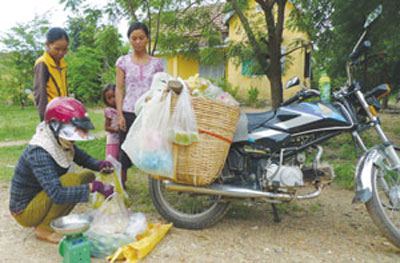 He thought people perceived him as "strange" and coming from an ethnic group due to his distinctive outfit. As a result, he decided to shun his culture and avoid wearing traditional costumes whenever he returned to the capital.

Pho is seen as a typical example of what has been dubbed "self-prejudice", an unexpected impact of development policies identified by researcher Hoang Cam from the Institute for Studies of Society, Economy and Environment (iSEE), in a recent study titled Minorities Catch up with Majority: Discourse, Policies and Implications.

Cam noted some of the many characteristics that the "minorities" are labelled as by the majority, such as "backward, poor, unable to weigh the pros and cons, less educated and observing lots of backward customs". The grim reality of these prejudices is that they lead to marginalisation.

Although Pho is no longer annoyed by such ways of thinking because he frequently travels to Ha Noi, he said many people in his region feel "marginalised".

"Following the styles they see on television shows and movies, they want to replace their traditional costumes with ready-to-wear clothes so they will look like the majority," he said.

"If we do nothing, our cultural identity will surely fade away," Pho said.

Pho was not the subject of Cam's study, which focused on the Dao in Bac Kan Province and the Raglai in Ninh Thuan Province, but to some extent his story shares their common link.

Cam quoted a 30-year-old Dao woman in Bac Kan's Cho Moi District: "A few years ago, there was still one woman wearing Dao clothes in the village. But, after being teased by people who said she looked like a hawk extending its wings, she stopped wearing them. So nobody wears Dao clothes nowadays."

Through interviews with locals and authorities plus field trips to these two provinces, Cam found that the State policies, which are inconsistent with the natural, cultural, and socio-economic conditions, have failed to meet the actual needs of the people. The findings also showed self-prejudice and the marginalisation of cultural identity and ethnic internal resources.

Starting from the prejudice that the Raglai people don't know how to trade and that they eat whatever they make, a policy to build a new, large-scale central market for the Raglai in Bac Ai District came to nothing.

"The heavily invested market was built but no one showed interest in trading there," Cam said, showing photos of the vacant concrete structure.

"Trading is long-established, but in other forms such as mobile markets [in which sellers travel from door to door with goods packed on their vehicles], or people trade with "acquaintances" [which means buyers can owe sellers for the stuff they buy]," Cam said at the Respect Culture Diversity of Ethnic Groups – Policies, Reality and Impacts workshop held in Ha Noi last Friday.

"Furthermore, small-scale markets would be more suitable because the modest production output does not ensure enough commodities for such a huge marketplace."

Ethnic groups are facing many challenges in cultural identity preservation as well as taking on new opportunities generated by the country's integration process, according to iSEE.

iSEE has conducted a study of several ethnic groups in Bac Kan, Lai Chau, Quang Tri and Ninh Thuan provinces during the second half of 2011 and the first half of 2012, in order to understand the reasons behind the current reality.

The research indicates that the diversity of cultural practices among ethnic groups has not been recognised and appraised adequately, leading to several unexpected consequences and creating many challenges for the sustainable development among these communities.

Nguyen Ngoc Anh, from the Committee for Ethnic Minorities, said the Vietnamese Government have promulgated many policies targeting ethnic groups in each region on all fields to help them develop.

"They co-exist so the policies cannot be detailed," she added, arguing that Cam's study results on the policy of sedentary is not strong enough to call Government policies "ineffective".

"The construction of the central market in Bac Ai District is an example of helping ethnic people familiarise with the market and eventually facilitating community development."

Based on his findings, Cam proposed recommendations including the creation of increased opportunities for dialogue, which could encourage the insiders to understand and respect diversity and differences.

"We should design, develop and implement programmes to encourage and promote self-discovery, recognition and evaluation of cultural values and internal power," he concluded.