The gold medal winner for a rescue robot at the 2013 International Exhibition for Young Inventors is Hoang Duy Khanh, a 12th grader in Lang Son province.

VietNamNet Bridge – The gold medal winner for a rescue robot at the latest IEYI (International Exhibition for Young Inventors) held in Kuala Lumpur in Malaysia in May 2013, was Hoang Duy Khanh, a Nung ethnic 12th grader from Lang Son province. 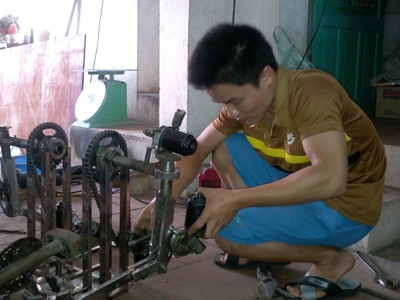 When asked what prompted Khanh to think of making LVT2 robot to bring to the international exhibition, Khanh said he saw the workers who got accidents during their works in the mines, and saw the mountain villages’ people whose houses and farm produce were collapsed by flash floods. Therefore, Khanh decided that he will invent a rescue robot which can work in dangerous conditions to replace people.

Luong Dang Ninh, Director of the Lang Son provincial Science and Technology Department, noted that LVT2 robot is relatively familiar to Japanese Asimo. However, it has some differences. It can swing up and down easily and lift heavy things, and able to work in hazardous conditions.

Khanh said he experienced very difficult days to make LVT2.  After mapping out the steps to implement and programming the design parts, Khanh could do nothing more because he did not have money to buy necessary accessories.

However, Khanh was lucky enough when he was encouraged by teachers, friends and the neighbors. The school, where Khanh studied, helped Khanh raise over VND10 million from the public after a donation call.

This was a modest sum of money, but big enough to help Khanh fulfill his dream.

The school’s headmaster himself then came to Hanoi to look for accessories at the flea market. The headmaster reportedly had to walk 10 kilometers to buy motors and other necessary accessories, because he decided not to spend the donated money to take taxi.

However, Khanh and the teacher failed in the first test run, and in the second one as well, because the equipment was too weak.

However, Khanh never intended to give up. He returned to Hanoi for the third time to choose accessories himself, with thorough consideration on every accessory.

LVT2 was done after one month of working. Khanh and the teachers burst into crying when seeing LVT2 performing operations.

In fact, the rescue robot was not Khanh’s first work. He once made the “magic binocular” which he brought to the Lang Son province children’s creation competition and won the second prize (there was no first prize).

Khanh’s eagerness for making inventions will surely continue in the future, as Khanh has become a student of the Hanoi University of Technology, one of the most prestigious schools in Vietnam in the training major. Khanh borrowed VND10 million from a bank to cover the exam expenses.

Born into a farmers’ family, since his childhood, Khanh has been making research on everything in his house, from torch, to TV, radio and fan. He has been encouraged more since he entered the Luong Van Tri High School in 2010.