Following a first-quarter rise, the BCI dropped 4.4 points in the second quarter to 68.8 points. In contrast with earlier in the year, compounding factors such as the continuing conflict in Ukraine, commodity price spikes, and the ripple effect of China's zero-COVID policy have dampened expectations among Vietnam's European business community.

Vietnam's potential growth is also being viewed with less favour by European business leaders. Up to 60% of respondents predicted that the Vietnamese economy would stabilise or improve in the third quarter of 2022, compared with 69 percent who held this belief entering the second quarter.

The survey also identified barriers to European investment in Vietnam and trade between the two sides are issues relating to reducing administrative procedures and infrastructure development.

Up to 45% of participants said that the main difficulties that foreign companies encountered are related to administrative procedures, which hinder their ability to utilise the Vietnam - EU Free Trade Agreement (EVFTA).

Although the outlook for European business leaders has decreased since the last quarter, the factors affecting it are mostly beyond the Vietnamese government's control, EuroCham Chairman Alain Cany said.

“With this BCI, Vietnam's path to improving its investment and business environment is clearly outlined. Green growth is the way of the future, not just because it will help build a prosperous foundation for Vietnam's economy and people, but also because it will support the country’s transformation into one of the world's strongest markets,” he said.

Although the BCI has fallen, it remains 7.6 points higher than in the fourth quarter of 2021, when it measured 61.0 points. Respondents also gave positive views on Vietnam’s prospects for green growth. According to the findings, 79% of participants said their assessment of Vietnam's green development potential improved from the first quarter. Regarding the link between green growth and FDI, nearly 90% of respondents believed Vietnam should increase green sector development to attract more foreign investment.

In addition, 45% of surveyed people were significantly or moderately satisfied with Vietnam's efforts to attract and retain foreign direct investment (FDI), while 76% expected their company to increase FDI to the country before the end of the third quarter. It is attributed to the fact that 55% of respondents said Vietnam improved its FDI attraction and retention capabilities since the first quarter. 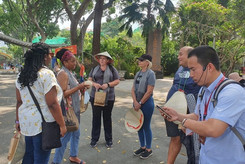