The Wall Street Journal (WSJ) on August 1 published a video report titled ‘When made-in-Vietnam products are actually from China’. 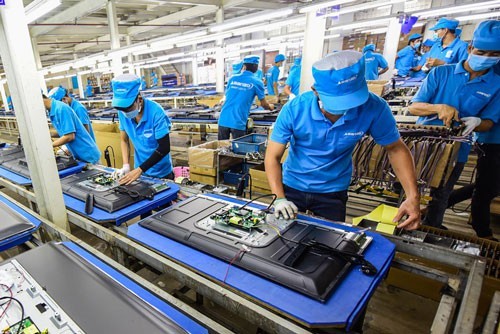 WSJ gave two figures which have close relations. From May 2018 to May 2019, Vietnam’s household-use electronic exports to the US increased by 72 percent. During the same time, the electronic parts Vietnam imported from China increased by 81 percent.

Also on August 1, the US President Donald Trump announced the US will levy 10 percent tariff on $300 billion worth of imports from China, commencing from September 1.

This is a new tariff, not the one imposed on the $250 billion worth of products which the US taxed 25 percent.

Analysts warned that when the name Vietnam is mentioned regularly in the context of the US-China trade war escalation, the US administration is likely to put Vietnam’s imports under stricter control.

They also said that Vietnam is at risk of bearing sanctions if it lets Chinese manufacturers illegally use Vietnamese origin. As a result, instead of getting benefits from the US-China trade war, Vietnam will be involved in misfortune.

Vietnam has suffered from the first sanctions for the problems related to origin fraud. The US DOC in July 2019 decided to impose a high tariff rate of 456 percent on anti-corrosion and HRC steel imports from Vietnam.

The products are believed to be made in South Korea and Taiwan, carried to Vietnam for minor processing before being shipped to the US.

In the domestic market, goods labeling is complex. A local newspaper denounced Asanzo, a TV manufacturer, of labelling Chinese TVs as Vietnamese.

Asanzo’s representative later admitted that 70 percent of TV content is made in China. Vietnamese are awaiting the final conclusion from state management agencies on whether Asanzo products are really made in Vietnam

An analyst said many other Vietnamese manufacturers also import components and accessories from China and label their products as ‘made in Vietnam’.

The Ministry of Industry and Trade (MOIT) said that there is still no criteria for products to be recognized as products can be labeled as ‘made in Vietnam’ or ‘product of Vietnam’. Now, manufacturers assess their products and make declarations about the origin of products.

In the latest news, the ministry on August 2 released a draft document on how to define made-in-Vietnam products.

Vietnamese origin of steel products needs to be transparent

Vietnamese steel manufacturers must be transparent about the origin of their products when exporting to all markets, experts say.