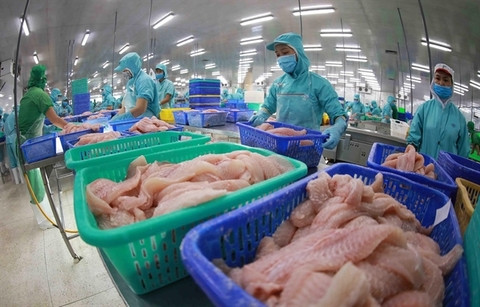 Tra fish processed for export to the EU. Vietnamese enterprises are urged to focus on improving product quality to meet requirements of the import market and the distribution system to expand in the EU. — VNA/VNS Photo Vu Sinh

According to Nguyen Thao Hien, Deputy Director of the European – American Market Department under the Ministry of Industry and Trade, 2022 was considered a very favourable time for trade and investment promotions with the EU as the two sides were focusing on accelerating post-pandemic growth and actively resuming economic and trade activities.

The EVFTA after two years of implementation provided not only a lever to promote two-way trade but also a great opportunity for enterprises from the two sides amid market fluctuations, together with disruptions of supply chains and geopolitical uncertainties, Hien said.

She cited statistics that bilateral trade between Viet Nam and the EU reached US$31.7 billion in the first half of this year, representing a rise of 14.5 per cent against the same period last year. Viet Nam’s export to the EU totalled $23.82 billion in the period, up 22.7 per cent.

Viet Nam was the fourteenth largest trade partner of the EU and the largest of the EU in ASEAN and the eleventh biggest supplier of goods to the EU.

Hien stressed after two years, more and more enterprises managed to take advantage of the trade deal by obtaining a certificate of origin (C/O).

The statistics of the ministry’s Import-Export Department showed that the rate of using C/O to be eligible for preferential tariffs under the EVFTA increased from14.8 per cent in the first year to 20.7 per cent in the second year. From the date when the EVFTA took effect to the end of June, more than 412,800 EUR.1 movement certificates were granted with total revenue of $16.5 billion to 27 EU member countries.

Still, penetrating and expanding in the EU market was not easy for Vietnamese enterprises because of the limited internal production capacity coupled with the lack of market information.

A number of products faced difficulties in accessing the EU market because they had not fully met the EU’s requirements regarding technical standards, traceability, environmental, social and sustainable development issues.

Nguyen Thi Hoang Thuy, Vietnamese Trade Counselor to Sweden, Denmark, Finland, Iceland and Norway, said that the EU market remained potential for Vietnamese enterprises, especially in the Nordic region where the people had high income and strong purchasing power with the demand for export amounting to around $400 billion per year.

Thuy cited statistics that Vietnamese goods currently accounted for less than 1 per cent of the EU’s total annual export value.

She pointed out that while trade revenue with the EU kept increasing, most Vietnamese enterprises focused on exploiting a few traditional markets in Western Europe.

According to Vu Anh Son from the Viet Nam Trade Office in France, the distribution system was an effective channel to expand the export of Vietnamese goods to the EU. However, bringing goods into the distribution channels requires enterprises to have long-term orientation and production plans to meet with standards of the markets and of each distributor.

Son said that after the pandemic and political upheaval, many distribution systems tend to establish supply chains for easier control and connection, adding that Vietnamese enterprises could grasp that trend to join their supply chains, especially for products in which Viet Nam had advantages in such as garments and footwear.

Selling products to the EU under the Vietnamese brand name had been showing positive signs, Son said, urging enterprises to focus on product quality for long-term and sustainable development.

According to Hien, it was essential to provide enterprises with detailed market information, not general orientations and opportunities but practical and specific to each target industry and product, together with the establishment of a support system to connect them directly with importers and access the distribution systems.

Khiem Nhat Thanh, general director of T&T Food, the importer of a distribution system in France, said that besides product quality, enterprises should have a long-term and specific marketing strategy to expand in the EU.