Instead of works for public interest, multistory buildings in Hanoi have arisen on land where factories and administration offices were located in the past.

Under a plan on developing the capital city, houses and multistory buildings are restricted in historic inner city areas, and construction and residential density must be low. 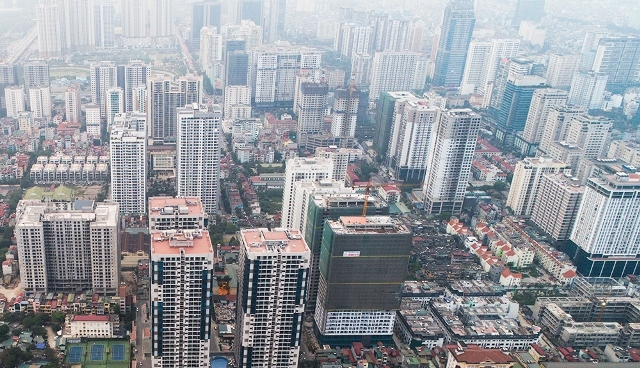 Hanoi authorities have issued regulations on the management of planning and architecture of high-rise buildings in inner-city areas.

However, the government’s report pointed out that instead of developing public works, multi-storey apartment buildings have arisen, putting pressure on population growth, and causing an overload on technical and social infrastructure in inner-city areas.

In three inner-city districts of Ba Dinh, Hai Ba Trung and Dong Da, many multi-story commercial centers, offices and high-end apartments were and are under construction.

The government report said that the relocation of some agencies and organizations and the land management after the relocation did not strictly follow the Prime Minister’s Decision No 130/2015.

“The relocation process has been going very slowly, and the land was not handed over after the relocation to city authorities to prioritize the building and development of public works as stipulated by the Law on Capital City,” the report reads.

Instead, many commercial housing and apartment projects have been developed on land where factories were located.

On Nguyen Trai Road in Thanh Xuan district, which had factories and workshops such as rubber, detergent, textile, bicycle and tobacco factories, housing complexes, commercial centers and apartments blocks with high density have been set up.

The municipal authorities have suggested some locations and offered land plots for nine ministries, agencies, education establishments and hospitals to set up their facilities.

However, to date, the University of Public Health is the only unit which has implemented the relocation, while the land plot the university left has been used for a multi-storey building. K Hospital and Endocrine Hospital have set up new facilities, but are still using facilities in the inner city. Most of the ministries still retain the old facilities.

Regarding transport development, the land reserved for transport remains modest, 8.7 percent as of the end of 2018, just one-third of the average level in the world (25 percent).

Every year, Hanoi’s population increases by 200,000 while infrastructure development increases by only 3 percent and the land fund for transport less than 1 percent. It is difficult to expand the transport routes in the inner city, and the cost for site clearance to expand roads is high, burdening the city’s budget.