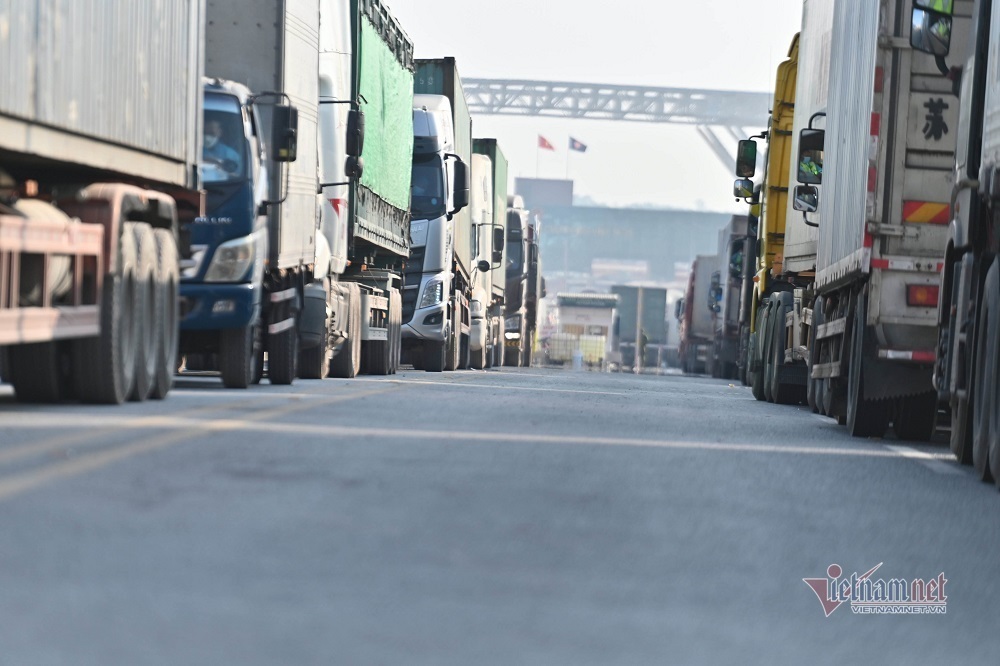 Any change in import policy from China is enough to create goods export congestion at border gates.

Nguyen Quoc Toan from the Ministry of Agriculture and Rural Development (MARD), reporting that more than 4,000 containers of goods are stuck at border gates in Lang Son, said it’s necessary to set up preliminary treatment and cold storage warehouses in areas along the border. Such warehouses are not available in both provinces.

The cold storage warehouses need to connect transport infrastructure so as to minimize logistics costs. One container of goods cannot move from Binh Thuan to Mong Cai as the value of farm produce would be lost on the way.

Meanwhile, Quang Ninh has a deep-water port in Hai Ha, so goods can be carried from the south to the north on waterways to minimize transport costs. Large farm produce centers such as Mekong Delta can also exploit the local canal network.

Before the goods distribution gets stuck at border gates, a deadlock was seen in the Mekong Delta during lockdown days, when the pandemic reached its peak.

An Giang Deputy Chair Tran Anh Thu said the supply chain disruption was serious from June to September 2021. Farm produce could not be sold and their prices dropped dramatically. Meanwhile, HCMC residents couldn’t buy farm produce and had to pay more for food.

As for the retail network, Nguyen Anh Duc, CEO of Saigon Co-op said there are two types of disruption. First, disruption in every locality. Goods cannot go from one locality to another, from HCMC to the Mekong Delta, from one province to the adjacent province.

Second, disruption because of the absence of some links in a chain. For example, when rice supply was abundant in An Giang, producers did not have packaging to pack the rice.

The congestion at border gates will lead to price fluctuations of agricultural products in localities in the near future. So there should be intervention to stabilize the market.

Dong Thap in the south has mango and Son La in the north also has. Vietnam has diverse farm produce, but it needs to decide how to use the produce to optimize the value chain, which products should be used for processing and which products to dining tables.

Toan said MPI and MARD have included in draft resolutions for Can Tho City the establishment of a logistics, farm produce processing and preservation complex for the entire Mekong Delta. The plan will be submitted to the NA Standing Committee for approval.

Dong Thap Chair Pham Thien Nghia agreed that Mekong Delta needs cold warehouses to store goods and an integrated center of production, logistics and distribution. There should be favorable conditions in the area, including seaports, processing industry and workforce.

The roads to Mekong Delta are always full of traffic, which are used for both cargo and passengers. The products from Mekong Delta are mostly raw materials, and are cumbersome. It’s not competitive to transport farm produce by land. There should be a specific logistics system for farm produce.

The export chain needs to be designed in a way to serve connections with seaports. Meanwhile, domestic consumption chains need to be designed to connect material growing areas in Mekong Delta provinces with the market in HCM City.

In developed countries, artificial intelligence (AI) is applied in logistics, and used to calculate vehicle density, average speed, load and demands in every area so as to decide where major distribution centers should be set up.

When Vietnam has to import farm produce